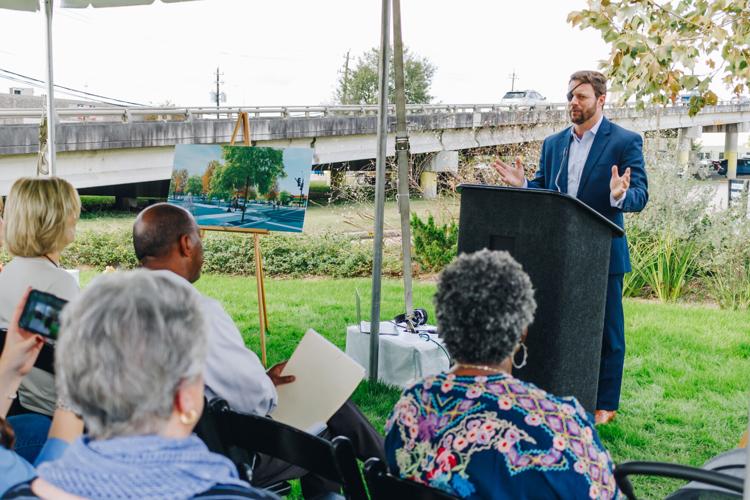 U.S. Rep. Dan Crenshaw, at podium, speaks during a groundbreaking event for the Shepherd and Durham Major Investment Project held last Saturday, Dec. 4 near the intersection of North Shepherd Drive and 6th Street in the Heights. (Contributed photo) 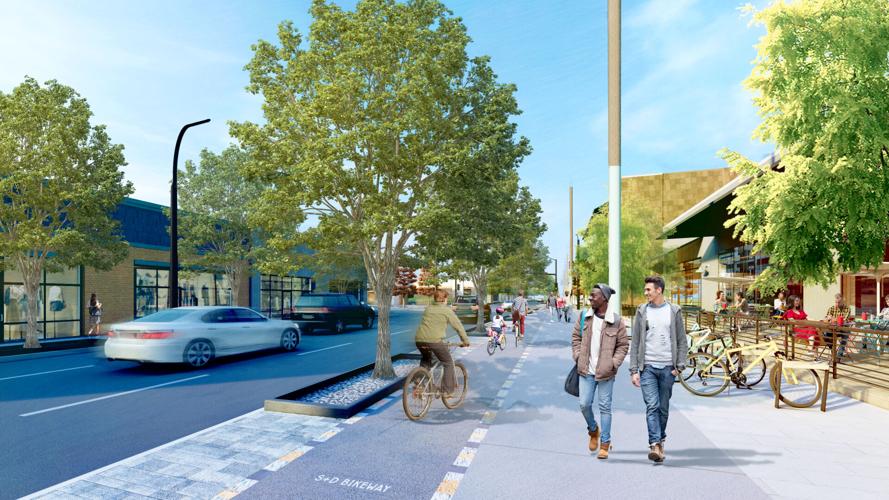 Pictured is an artist's rendering of what North Shepherd Drive and Durham Drive should look like after the Shepherd and Durham Major Investment Project is constructed. (Contributed rendering) 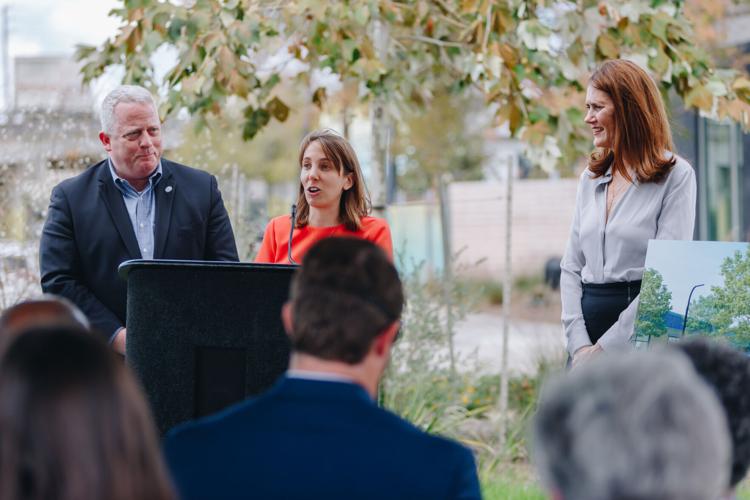 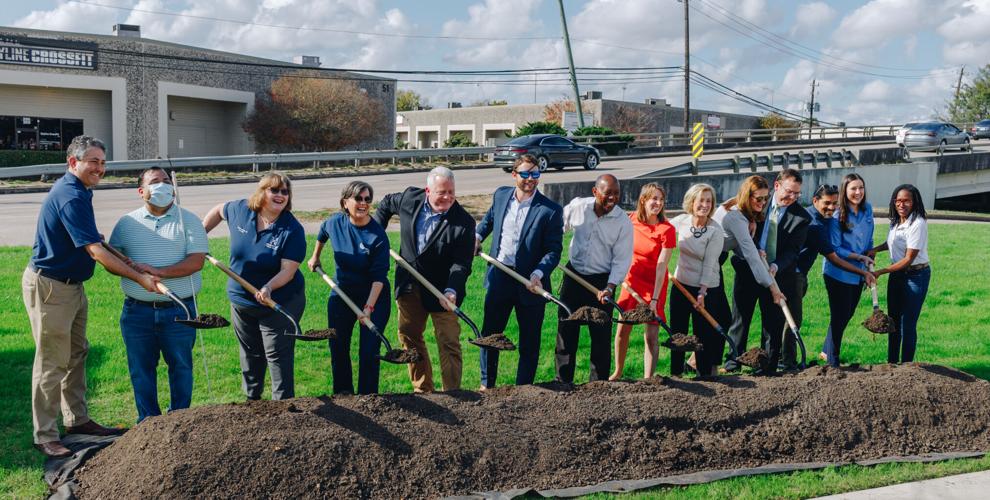 Representatives from the City of Houston and others participate in a groundbreaking ceremony last Saturday, Dec. 4, for the Shepherd and Durham Major Investment Project. Construction is expected to start in late January. (Contributed photo) 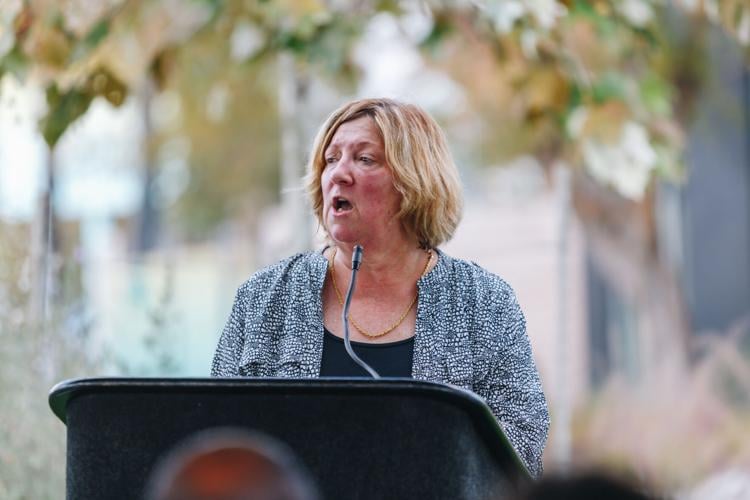 Sherry Weesner, president of the Memorial Heights Redevelopment Authority, speaks during a groundbreaking event for the Shepherd and Durham Major Investment Project last Saturday, Dec. 4, in the Heights. The organization is spearheading the project. (Contributed photo)

Beginning next month, those who travel along North Shepherd Drive and Durham Drive in the Heights are going to have to cope with road construction – for at least the next five years.

For decades after that, though, driving down the parallel, one-way thoroughfares figures to be smooth sailing. And the same goes for walking and cycling.

Construction is expected to start in late January on the Shepherd and Durham Major Investment Project, which will overhaul the two north-and-south streets between North Loop 610 and Interstate 10 to the south while adding bicycle lanes, new and wider sidewalks, landscaping and new underground infrastructure for water, wastewater and stormwater drainage. The project could take at least five years to complete, according to president Sherry Weesner of the Memorial Heights Redevelopment Authority, which is spearheading the $115 million initiative and providing a significant portion of the funding for it.

“It’s going to take a lot of patience from all of us, but it’s going to be worth it,” said Houston City Council member Abbie Kamin, who serves the Heights as part of District C.

Weesner and Kamin were among several community stakeholders, leaders and elected officials who participated in a groundbreaking ceremony for the project last Saturday near the intersection of the North Shepherd Drive and 6th Street. Also present were Houston Mayor Sylvester Turner, at-large city council members Sallie Alcorn and David Robinson and U.S. Rep. Dan Crenshaw, who helped secure a $25 million federal Build Grant for the first phase of the project, which will cover the stretches of Durham and Shepherd between 610 and West 15th Street.

Weesner said construction for the two Heights phases is slated to cost a total of about $100 million, with the Memorial Heights Redevelopment Authority, also known as Tax Increment Reinvestment Zone 5 (TIRZ 5), covering about $35 million of that cost. TIRZ 5 was created by the city and is allocated a portion of municipal tax revenue to be used for improvement projects.

The aforementioned Build Grant and an additional $40 million in federal dollars, allocated by the Houston-Galveston Area Council, will cover a bulk of the cost. Weesner said the city is paying for the new water and sewer lines that will be installed.

“We have been working on this for a very long time,” Weesner said. “We’ve worked with a number of entities, and we are very, very pleased that we’re finally getting to start work.”

Construction work started earlier this year on the city’s related project to the south, which has a budget of a little more than $12 million, according to information on engagehouston.org. Houston Public Works announced in November that it was modifying the project to include protected bike lanes at the urging of concerned residents and stakeholders, such as the cycling advocacy nonprofit BikeHouston.

The city’s initial plan called for unprotected bike lanes. It was formulated before the implementation of the Houston Vision Zero Action Plan, which aims to eliminate traffic-related fatalities by 2030.

“I am very grateful to BikeHouston and Public Works,” Kamin said. “Public Works should get a lot of credit for going back in to fix the issue to make sure we’re getting protected bike lanes.”

New, wider sidewalks will be installed on both sides of Shepherd and Durham, where vehicular traffic lanes will be reduced from four to three on both streets with the addition of designated turning lanes at select intersections with typically heavy traffic, such as West 11th Street. Weesner said two different traffic studies showed that congestion on Shepherd and Durham was caused mostly by the absence of turn lanes at busy intersections, so there does not figure to be a negative impact on traffic flow even with the overall reduction in lanes, she said.

Weesner said two other features of the project are city-owned street lights and an underground bio-retention system – called the Silva Cell Tree and Stormwater Management System – that will be beneath the trees planted on each side of Shepherd and Durham. The idea is to capture stormwater to help drainage and promote the growth of large trees.

“This is a really great project, because it can do so much,” Weesner said. “The area is really changing. The area has lots of new restaurants and other facilities, and people want to be able to walk there. People need to be able to walk from one business to the next business. Improving all modes of transportation is very important.”

Of course, the long-term benefits of the project will come with a shorter-term cost – construction. Weesner said the plan is to expedite the process by working on different portions of the streets at the same time.

She also said the plan is to keep Shepherd and Durham open and passable throughout construction, even though lanes will be reduced at times.

“I’m hopeful that at the end of the project we will have a beautiful and more functional pair of streets,” said Mark Williamson, the land use chair for the Houston Heights Association and president of the Greater Heights Super Neighborhood Council. “But the next five years will be inconvenient as most reconstruction projects are.”

So, they're going to take a already daily congested 4 lane road and turn it into a 3 lane road so that bicyclists have a place to ride. Well, anything that Dan Crenshaw is involved in is bound to be "short-sighted"....ba-dum-bum..........