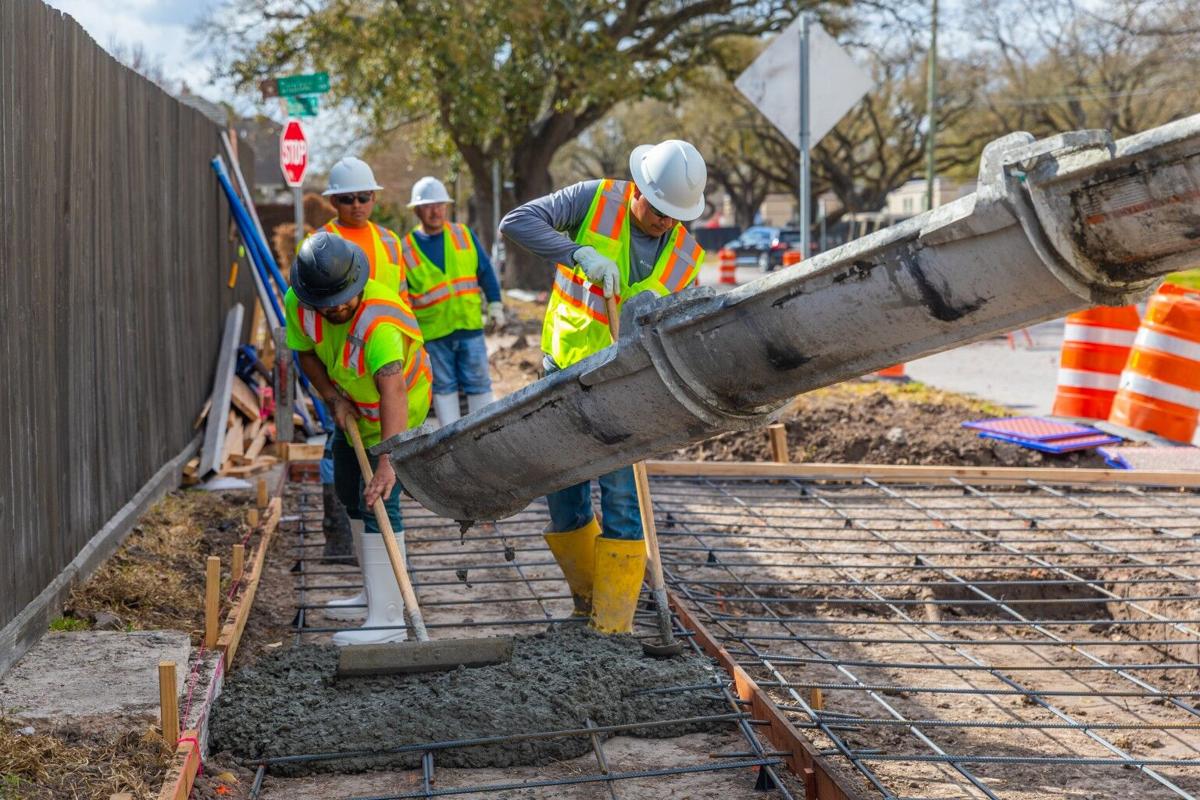 Construction workers pour concrete for a METRO bus stop on Studewood Street in the Heights, where the public transit authority is upgrading several bus stops this year. (Photo from METRO) 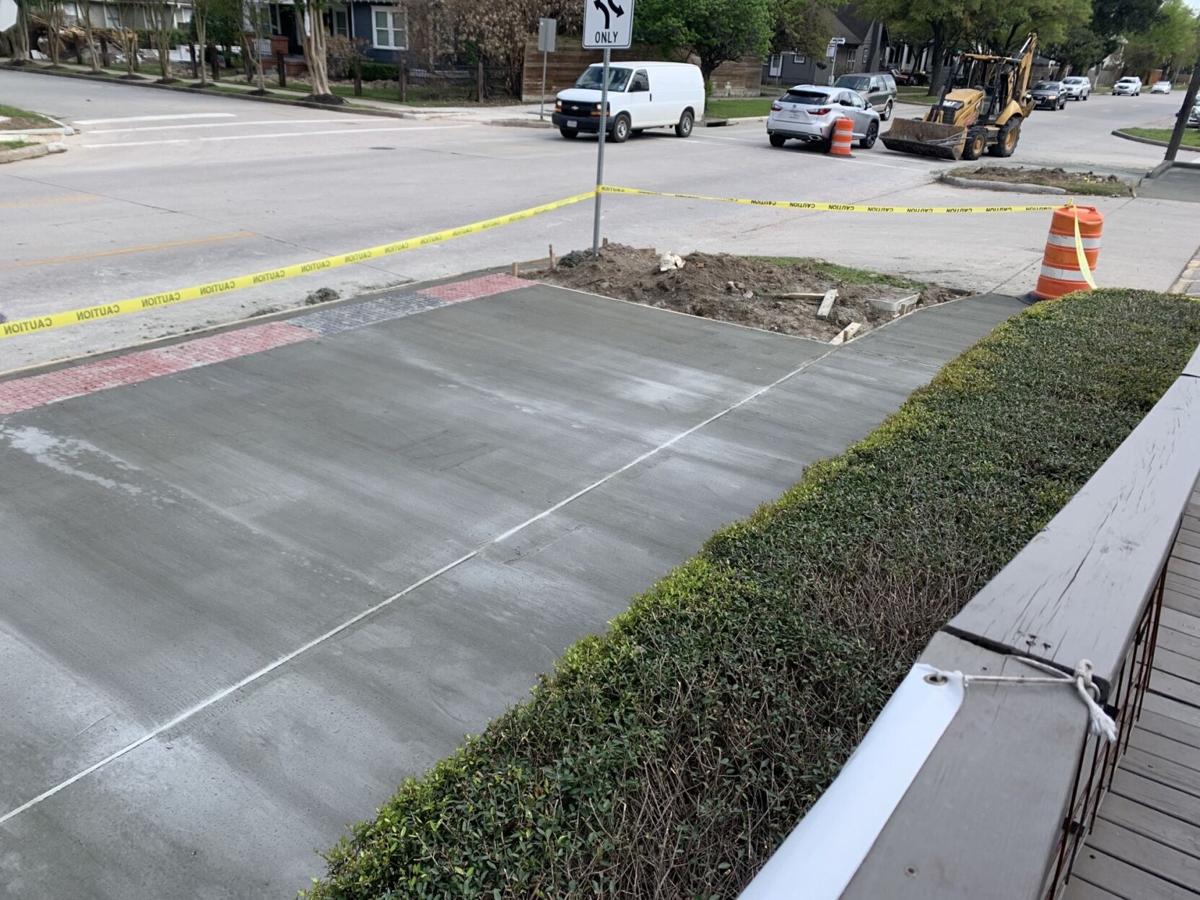 METRO is installing a new bus stop with a lighted shelter in front of the patio for Good Dog Houston, a restaurant at 903 Studewood St., as part of a broader improvement project in the Heights. There area where fresh concrete is seen was previously a patch of grass. (Contributed photo) 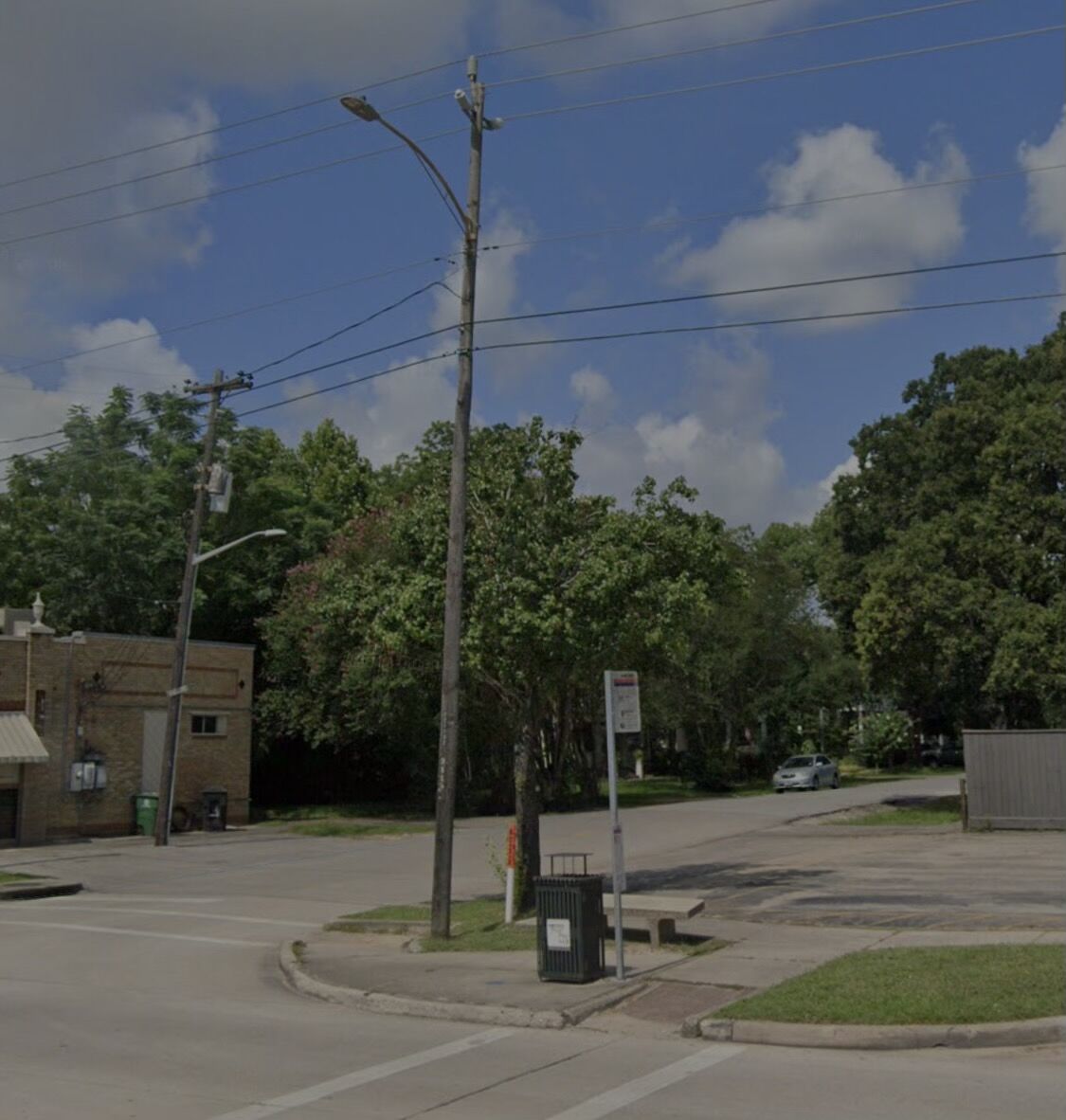 Pictured is a former METRO bus stop at the northwest corner of Studewood Street and 9th Street in the Heights. It is being replaced with a new bus stop a few yards to the north. (Contributed photo)

Construction workers pour concrete for a METRO bus stop on Studewood Street in the Heights, where the public transit authority is upgrading several bus stops this year. (Photo from METRO)

METRO is installing a new bus stop with a lighted shelter in front of the patio for Good Dog Houston, a restaurant at 903 Studewood St., as part of a broader improvement project in the Heights. There area where fresh concrete is seen was previously a patch of grass. (Contributed photo)

Pictured is a former METRO bus stop at the northwest corner of Studewood Street and 9th Street in the Heights. It is being replaced with a new bus stop a few yards to the north. (Contributed photo)

Good Dog Houston co-owner Amalia Pferd said she and her business partner support the expansion of public transportation in the region and “love” having a bus stop close to their restaurant in the Heights.

They just don’t want one directly in front of their patio.

Pferd said METRO, the public transit authority for Harris County, began construction on a new stop in front of her business on March 25. The plan, according to METRO, is to install a lighted shelter for riders along with a digital sign displaying bus arrival information.

The new stop will replace the existing one on the opposite side of Good Dog’s parking lot, at the northwest corner of Studewood and 9th Street.

“It’s going to be an eyesore,” Pferd said of the shelter. “That’s what we’re going to be staring at. I’m also worried about its height, if it will obstruct the view of our restaurant.”

Pferd said the popular hot dog restaurant at 903 Studewood St. has been in contact with representatives from METRO and hopes they will amend the plan to include only a bench and trash can and not the shelter, which provides riders a reprieve from the sun and rain. But she said it may be too late, with METRO having already removed the patch of grass between the patio and the street and replaced it with a large slab of concrete in anticipation of installing a shelter.

The work is part of a much more extensive plan for METRO, which is rolling ahead with improvements to its transit network after Harris County voters approved a $3.5 billion bond package for the METRONext initiative in November 2019. A METRO spokesperson said it is spending more than $1.18 million to improve a 1.5-mile stretch of Studewood between White Oak Drive to the south and Cavalcade Street to the north, which is part of the broader 56 Airline/Montrose route.

As part of a construction project that began March 1 and is expected to last about nine months, 14 bus stops along Studewood are being augmented with features such as the lighted shelters, digital signage and expanded loading and unloading pads. METRO also is improving pedestrian crossings and sidewalks along that stretch – adding sidewalks that connect bus stops to Heights High School, Hogg Middle School and Proctor Plaza Park – and adjusting traffic signals in an attempt to improve bus speed and reliability by reducing the time they spend at red lights.

“With less than a month of work completed, some METRO riders will soon enjoy the benefits of the BOOST improvements,” a METRO spokesperson said, using the organization’s tagline for the initiative. “On some portions of the route, new sidewalks and ramps are near completion as well as digital arrival signage.”

The METRO spokesperson said the entirety of the 56 Airline/Montrose route, which has an average weekday ridership of 3,587, according to METRO’s January ridership report, is slated to be upgraded and will remain operational throughout construction. No street closures are anticipated, the spokesperson said.

Six of the 14 bus stops on Studewood are being relocated, such as the one in front of Good Dog.

“We are working closely with the contractor to advance the timeline as quickly as possible and in some cases the contractor is working on segments in multiple locations at the same time to minimize the length and scope of the impact to area business and property owners,” the METRO spokesperson said.

Pferd said Good Dog’s landlord received about three weeks’ notice from METRO before the start of construction, although they initially were under the impression that the existing bus stop at the corner of the property would be improved and not relocated to be directly in front of the restaurant.

She said there are more suitable locations for the new bus stop, such as in front of buildings that are larger than Good Dog, which operates out of a former house. Pferd said the restaurant has not seen a negative impact on business since construction began, however, and she understands METRO’s desire to expand and improve its services.

“They’re trying to encourage the use of METRO, which is great,” she said. “I think that would be wonderful.”

Pferd is not as enamored with the idea of having a bus stop shelter within a few feet of her front patio, but she said Good Dog plans to stay put and will make do. She’s even considering ways the restaurant could capitalize on the upcoming bus stop, such as possibly adding a METRO-themed item to its menu or offering some sort of special to bus riders.

Maybe Good Dog, which started out as a food truck, could park a hot dog cart next to the shelter.

“We always want to see the silver lining of any situation that happens, whether it’s COVID or a freeze or anything,” Pferd said. “We’re always trying to figure out what we can do to make it the best situation. If (METRO) can work with us, it would be great. If they can’t, we’re going to move forward.”