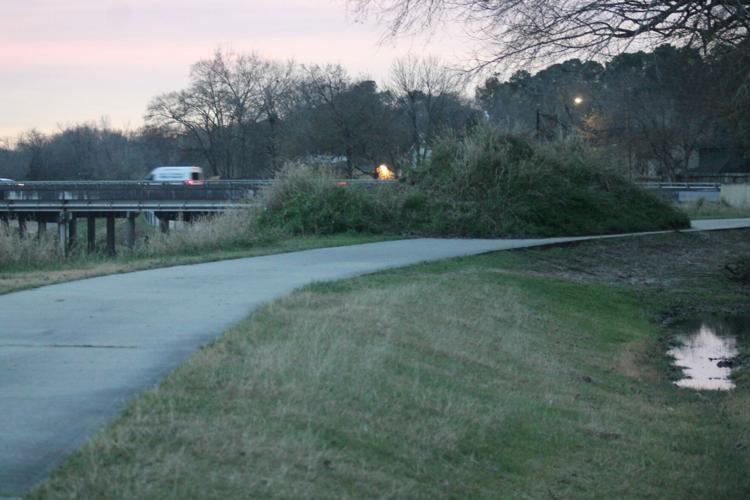 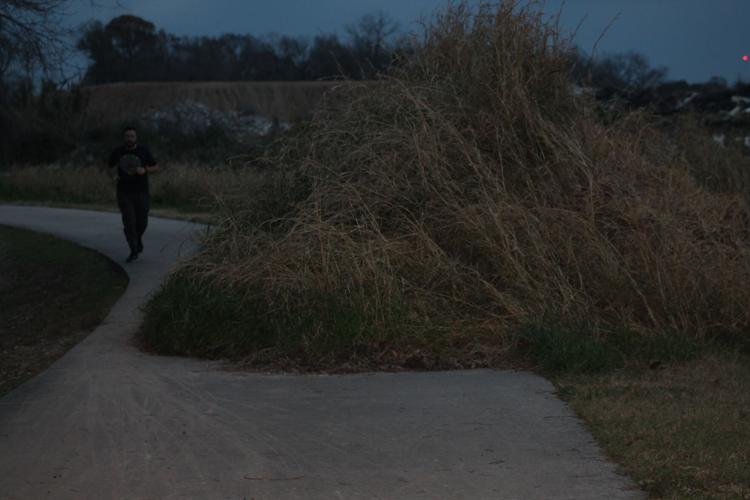 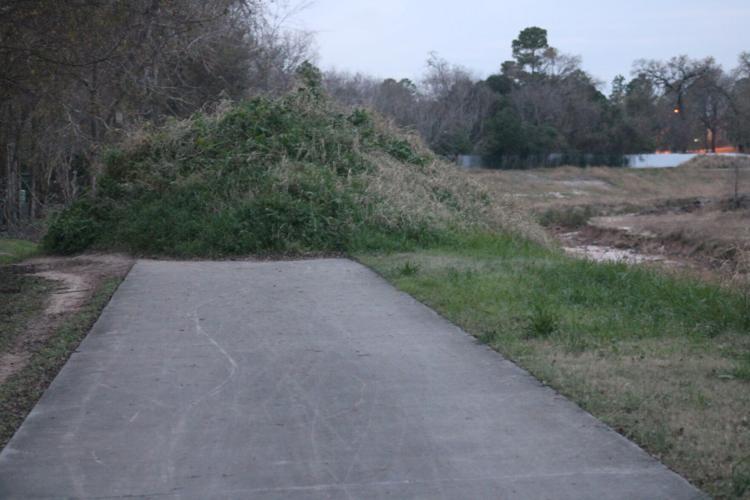 The grassy mounds of dirt that have spent months atop part of the White Oak Bayou Trail are taller than Jonathan Moore and stretch across the concrete path he likes to use when jogging.

On Tuesday evening, though, they didn’t exactly get in his way.

Moore, a Heights resident who said he had run more than 4 miles to the north and was starting to head back home, merely stepped off the trail to the side to avoid the series of mounds on the section north of West Tidwell Road.

Then, after running past each mound, he veered back onto the paved path.

“I think it’s more annoying than anything,” Moore said. “I just run around it.”

The reason the dirt piles are there, according to a spokesperson for the Harris County Flood Control District (HCFCD), is to deter people like Moore from using the trail. It runs along the west side of a bayou that is under construction, with the flood control district making channel restorations and improvements as part of two related flood mitigation projects.

More than $33 million in federal funding is being used to restore White Oak Bayou to its originally designed conditions, according to HCFCD spokesperson Sheldra Brigham, who said the construction work covers the stretch of trail from Cole Creek just south of Tidwell to FM 1960 to the northwest.

Construction has been ongoing since November 2020 between 1960 and Hollister Street to the southeast, with work starting last June between Hollister and Cole Creek.

In both instances, Brigham said HCFCD’s contractor initially placed street-closure barricades and trail-closed signs in the construction areas, which must otherwise remain open so the contractor can access the bayou. And in both cases, she said the barricades were removed on an almost daily basis by people who used the trail anyway.

So the series of dirt mounds were placed atop the trail – roughly 100 yards apart – and will remain there until the construction work is complete. Brigham said that is expected to happen this summer, at which point the dirt piles, which in most cases are topsoil from the banks of the bayou, will be returned to the side slopes of the channel during the final grading.

“Barricades were put in place for the safety of residents and to keep the work area safe,” Brigham said. “However, the barricades were being moved, which is a concern and posed a risk to those who might enter the trail unaware that active construction is underway. Out of an abundance of caution, dirt piles were placed to deter people from entering the trail during active construction.”

Moore said he would not use the trail if he saw active construction work, which there was not on Tuesday.

Joe Cutrufo, the executive director of nonprofit BikeHouston, said he and other cyclists started noticing the dirt mounds a few months ago and did not initially know why they were there. He said he wondered if they had been put there without regard for trail users.

After learning about the purpose of the dirt piles, Cutrufo said he wished there had been better communication about the work and its timeline along with signage explaining why that part of the trail is closed.

“It’s a solution that has people pretty upset,” Cutrufo said. “Now there are no more trail-closed signs. People are riding up there, and you see these giant mounds of dirt.”

When the construction work on the bayou is done, Brigham said there will be a complete trail between Cole Creek and Jones Road that is 10-feet wide with below-bridge crossings. She said there also will be new trails, with public access points and parking lots, around the detention basins that are being constructed as part of the project.

The channel work on the bayou includes the installation of new outfall pipes, concrete weirs and reinforcements to the bridges that cross White Oak Bayou that aim to reduce erosion from flowing water, according to Brigham. She said the project will reduce structural flooding risks near the bayou and remove many homes from the current 100-year flood plain.

In the meantime, the flood control district hopes runners, walkers and cyclists remove themselves from that part of the trail.

“The trails are closed,” said Matt Zeve, the deputy executive director of the flood control district. “We need people to stay out of the active construction areas.”

Calling this an "active construction zone" is a hilarious misrepresentation. I've passed by those piles for months and nothing has changed... other than the dirt piles, that is. There's no reason to shut down a whole section of trails for *years* when the trail is structurally sound and they can block off the parts they're actually working on!