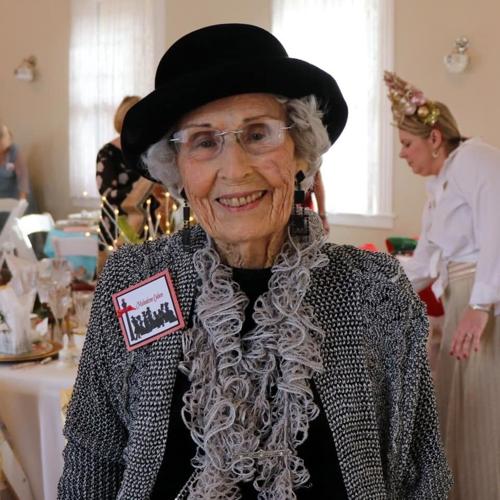 Melvalene Cohen, who died Monday at age 98, liked to dress up for events held by the Houston Heights Woman's Club, for which she once served as president. (Photo from Viula Torgerson) 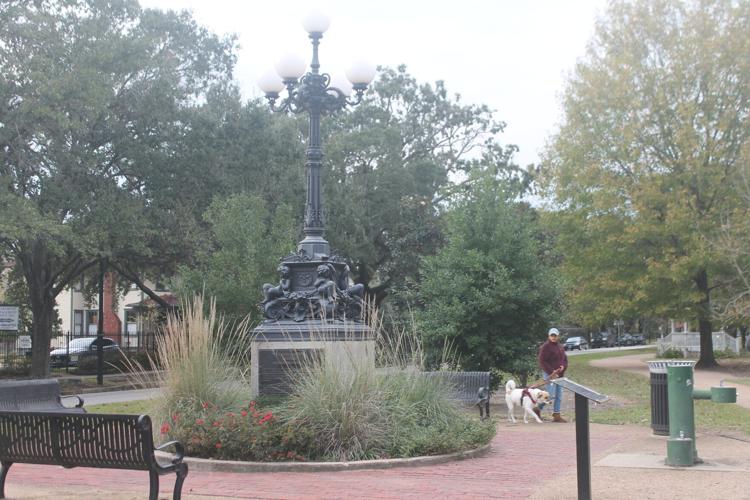 Melvalene Cohen, who died Monday at age 98, was instrumental in the City of Houston placing the Lombard Lamp, a gift from Hamburg, Germany, on the Heights Boulevard esplanade. It is part of the Carl and Melvalene Cohen Plaza. (Photo by Adam Zuvanich) 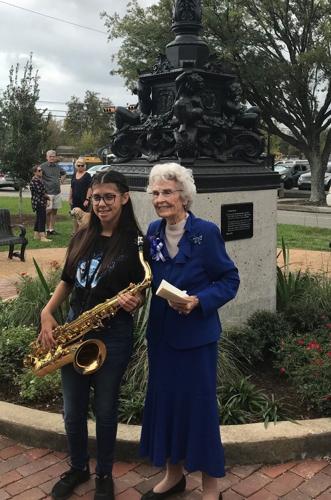 Melvalene Cohen, right, embraces a young musician during the rededication of the Carl and Melvalene Cohen Plaza on the Heights Boulevard esplanade in 2017. (Photo from Bill Baldwin) 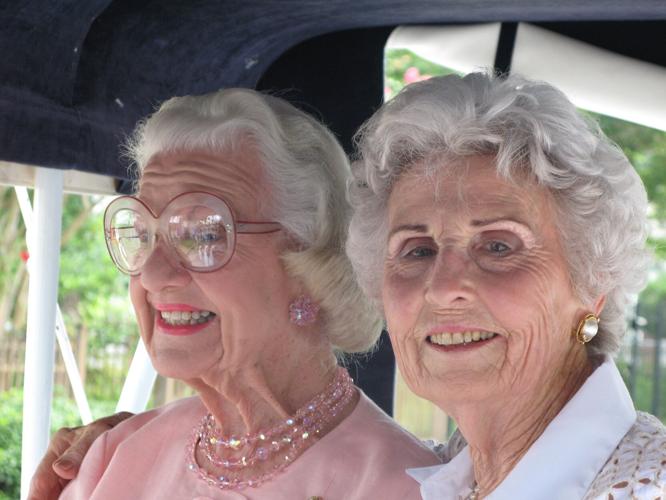 Melvalene Cohen, who died Monday at age 98, and the late Libby Lee were affectionately known as "grande dames" of the Heights. (Photo from Mark Williamson)

The Heights is a beloved part of Houston because of its style and charm, historic character and balance between being elegant and down to earth.

Those were all qualities embodied by Melvalene Cohen, who helped shape the neighborhood into what it is today.

Cohen, who died Monday at age 98, opened a grocery store in the Heights in the 1950s and remained in the area throughout the rest of her life. She helped revitalize the neighborhood along with her husband, Carl, as founding members of the Houston Heights Association (HHA) in the 1970s, and she also was active with the Houston Heights Woman’s Club, for which she once served as president.

Melvalene Cohen was politically involved as well and helped to beautify the Heights while nurturing its children. She did so while often dressing to impress and charming friends and neighbors with a quick wit and easy smile.

“We wouldn’t be here today if it wasn’t for people like Melvalene. We wouldn’t be here at all,” said Heights resident Laura Virgadamo, a friend and fellow member of the woman’s club. “The Heights would be nothing or nobody. It would be torn down and there wouldn’t be any history. They’re the kind of people that fought to preserve this neighborhood.”

Cohen, affectionately known as a “grande dame” of the Heights, was a recipient of the Leader of the Year honor, awarded by The Leader, and became the fourth recipient of the HHA’s Pioneer Award in 2019. She and Carl, who owned and operated the Studewood Food Market, helped found the HHA in 1973, with Carl serving as its first president, and were recognized three years later as its Citizens of the Year.

The Carl and Melvalene Cohen Plaza on the Heights Boulevard esplanade was first dedicated by the City of Houston in 1999, the year Carl died, and includes the Lombard Lamp, which was gifted to Houston by the city of Hamburg, Germany, in 1979. Melvalene served on the Houston Arts Commission at the time and, according to friend and former HHA president Paul Carr, was instrumental in having the decorative street lamp placed in the Heights instead of Hermann Park.

“The Houston Heights Association is deeply saddened to learn about the loss of Melvalene Cohen,” the HHA said in a statement. “She was a pillar of the Houston Heights and one of the last surviving founding members of our association. Our community is still reaping the rewards of her pioneering efforts, and we plan to continue working diligently on living into her vision. Our condolences go out to her family and friends.”

According to her online obituary, Cohen grew up in the East Texas town of Garrison and married Carl Cohen four years after graduating from high school. She is survived by two sons and two grandchildren, among other relatives.

She spent the last few years of her life at The Village of the Heights, an assisted-living retirement community at the northwest corner of East 14th Street and Studewood Street. It’s the same property where the Studewood Food Market was located.

“Melvalene made jokes before she passed away that she was now living in their produce department,” Carr said.

Heights historian Anne Sloan, who founded the evening group of the Houston Heights Woman's Club, said Cohen provided essential guidance and support in that effort. In a Facebook post, the woman's club described Cohen as a dedicated, gracious and valuable member, having been renowned for her affability, sewing skills and refined cucumber tea sandwiches.

"For me personally she was a confidante, a sister, a mother and my dearest friend," Sloan wrote in an email. "Her business acumen was outstanding, her energy phenomenal, and her kindness knew no bounds. There is a hole in my heart."

Cohen's impact stretched beyond the Heights, and Houston, all the way to the state capitol in Austin as she had a hand in the initial election of the longest-tenured member of the Texas Senate. John Whitmire, a Democrat who represents the Heights area, said the Cohens supported him and offered advice when he first ran for the Texas House in 1972.

Whitmire said he won the precinct that includes Timbergrove, where the Cohens lived for many years, because of their support and influence. He has kept in contact with the family over the years and said he got a call from Melvalene as recently as a couple months ago.

“I can’t tell you what it meant for a 22-year-old candidate for the legislature to have them support me,” he said. “They did it, I believe, because they were always helping young people. I being a Waltrip High graduate, they really identified with me and really endorsed me.”

Cohen was involved in area schools and a longtime den leader for a local troop in the Boy Scouts of America, according to Carr, who said the scouts mentored by Cohen typically picked up trash after a former annual festival that was held on Heights Boulevard. Carr said his lasting memory of Cohen is of her wearing a long blue dress with a Boy Scouts pin on the collar.

Fashion often was at the forefront for Cohen, who dressed her best for costume parties and events held by the Houston Heights Woman’s Club. Those who knew her say her style was infectious, as was her personality and dedication to the Heights neighborhood.

“She was a wise, warm and witty lady of the first order, ever glamorous, and a profound asset to our community,” said former Leader publisher Terry Burge, also a founding member of the HHA. “Like countless others, I cherish my friendship with her.”