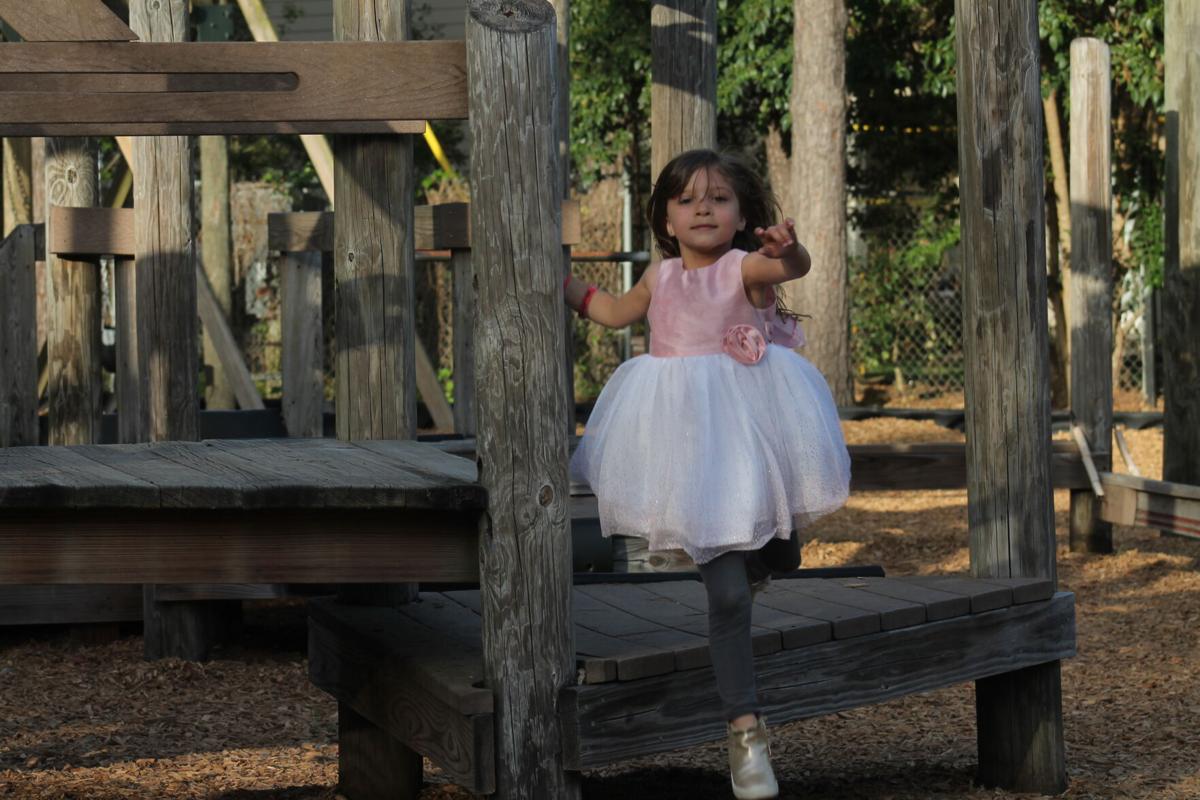 Simone Farath, a 5-year-old Heights resident, jumps off a playground structure Tuesday at Donovan Park. The popular park at Heights Boulevard and 7th Street reopened Monday after being closed for a year because of safety concerns related to COVID-19. (Photo by Adam Zuvanich) 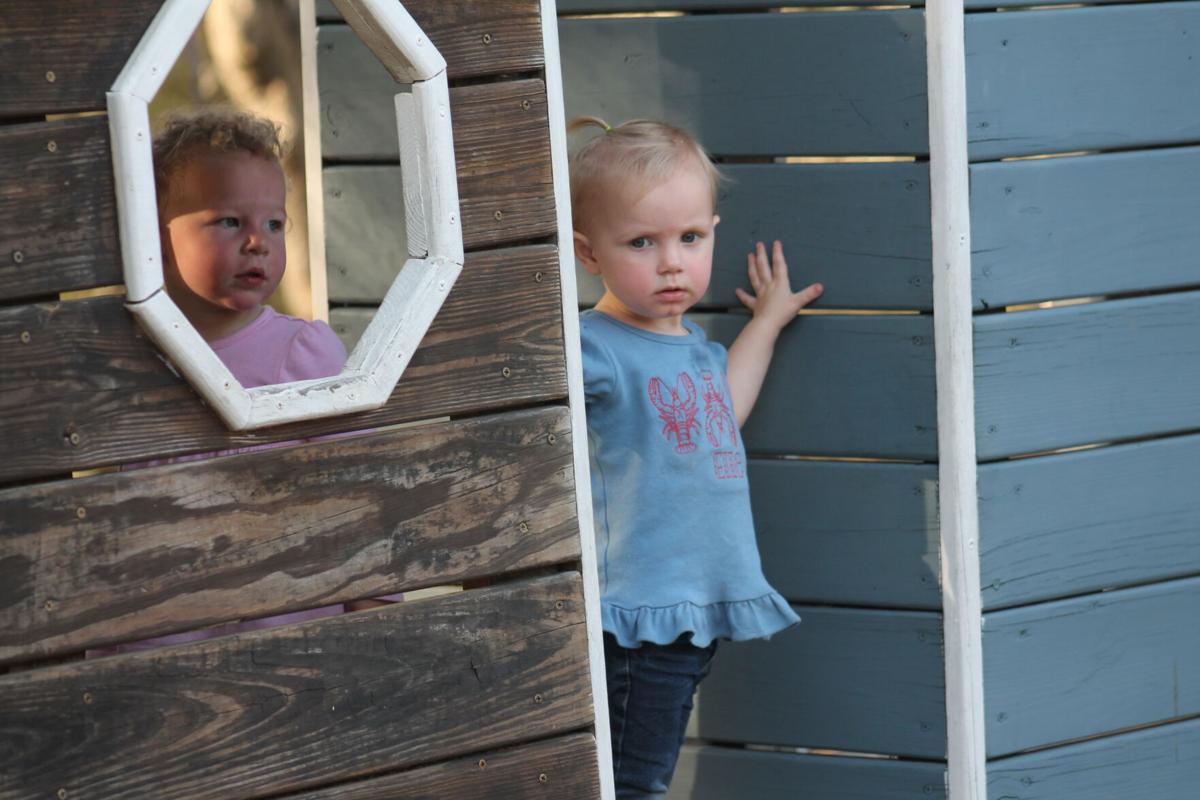 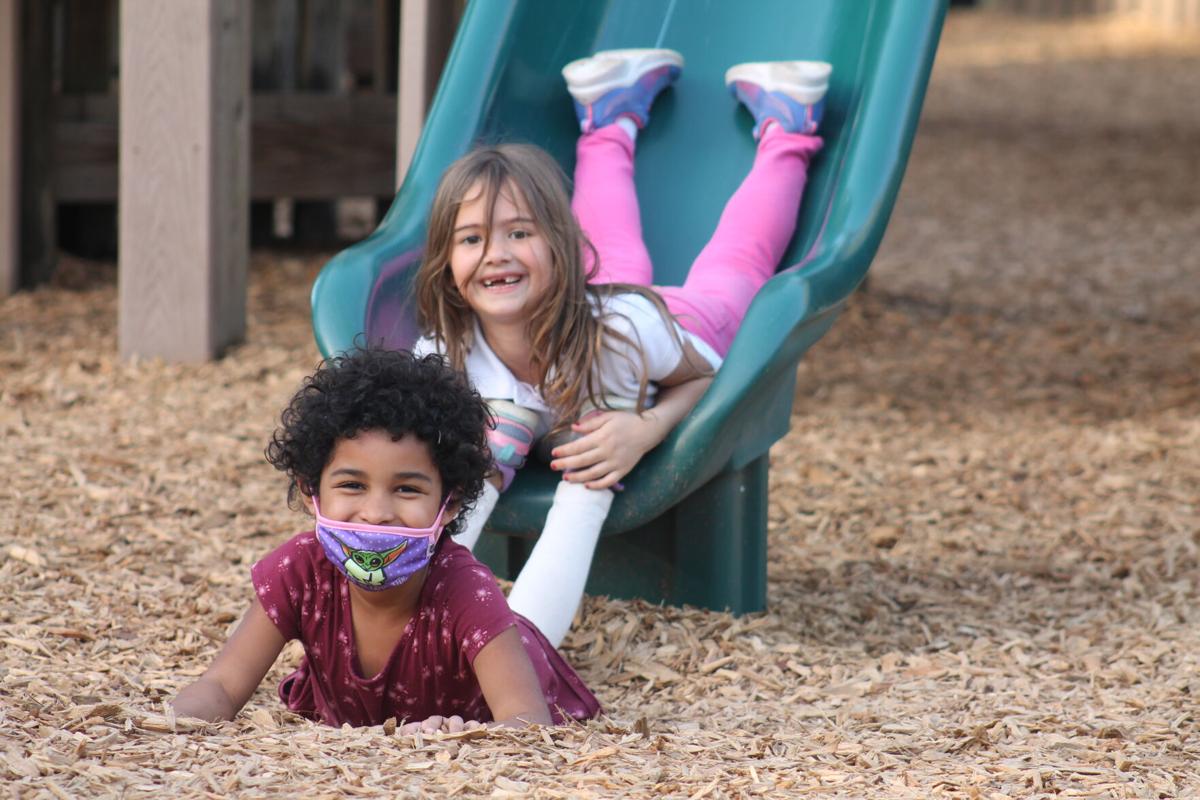 Emma Honeycutt, foreground, and Elizabeth McReynolds followed each other down a slide Tuesday at Donovan Park. (Photo by Adam Zuvanich) 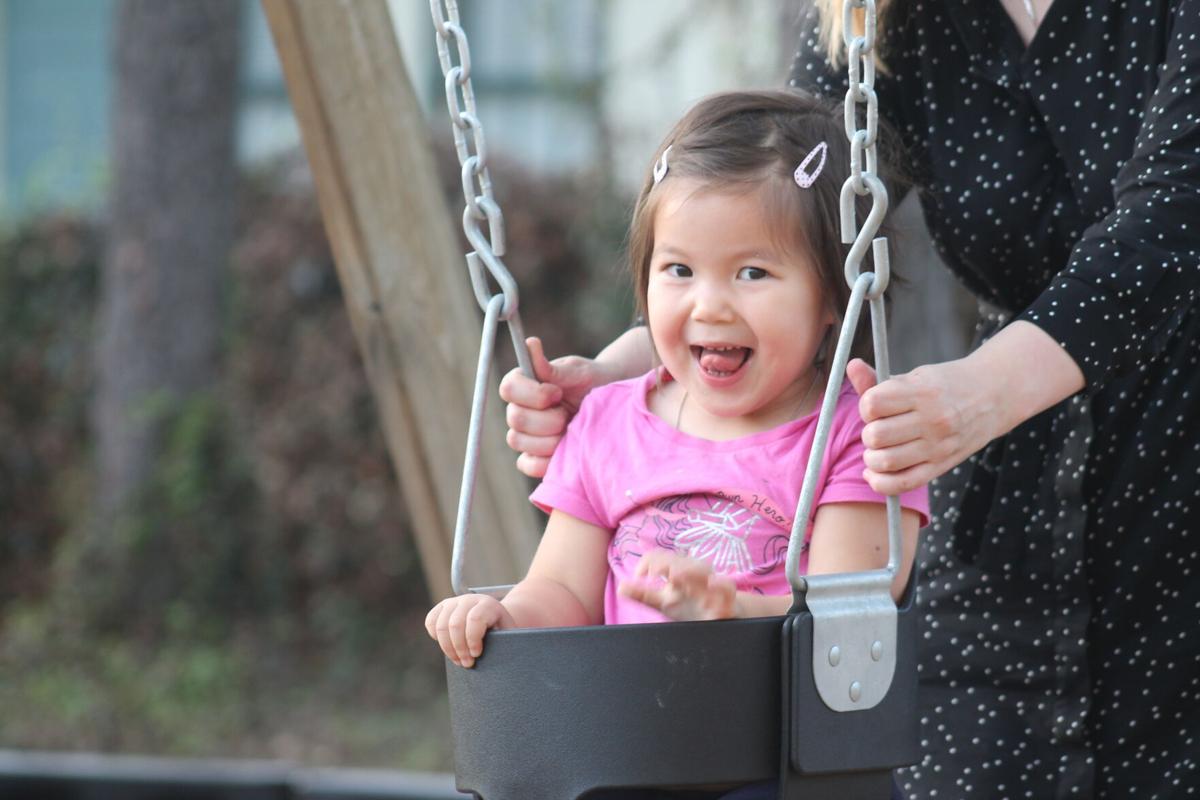 Dena Honeycutt used to take her daughter to Donovan Park a few times per month. Tuesday’s visit was their first in a year, so 6-year-old Emma made the most of it.

She and her friend, Elizabeth McReynolds, smiled and laughed as they darted around the beloved Heights park, which measures 37,505 square feet and consists mostly of wooden playground equipment. They spent some time on the swings, went headfirst down a slide and walked all over the train-like structure at the front of the park, among other adventures on a sunny spring evening.

“My daughter’s ecstatic. She’s been running around for the last hour,” Dena Honeycutt said. “I don’t know if I’m going to be able to get her home.”

The Honeycutts are among many Heights families who have enjoyed being reacquainted with Donovan Park, which reopened Monday after being closed since March 25, 2020, because of safety concerns related to the COVID-19 pandemic. Executive director Emily Guyre of the Houston Heights Association (HHA), which owns and manages the 25-year-old park at the northeast corner of Heights Boulevard and 7th Street, said the neighborhood nonprofit decided to unlock the gates in correspondence with a similar move by the City of Houston.

The Houston Parks and Recreation Department had previously announced that Monday was the day it planned to reopen outdoor amenities such as playgrounds, exercise stations, tennis courts and baseball and softball fields at its city parks, which otherwise have remained open throughout the pandemic. Depending on COVID-19 case numbers in Houston, which have mostly been on the decline since January, the city plans to reinstall basketball rims and open more sports fields and courts next Monday, March 29.

“From the beginning, the (HHA) board had decided we were going to follow the City of Houston protocols,” HHA board member Idalia Guerra said. “I think a lot of people weren’t aware that even though a lot of recreational parks were open, the playgrounds were not open. Since Donovan Park is a playground, we wanted to make sure we were being safe and following orders.”

Guyre said the HHA “felt like it was time” to reopen the park this week, with community members having frequently asked about its status. Donovan Park also got some recent upgrades in consultation with Nick Pagel, a Candlelight Estates resident and the owner of Imagination Woodworks.

Guerra said the HHA spent nearly $9,000 to lay new mulch throughout the playground, replace the swings and the trash cans and improve the park’s drainage system by cleaning out its inlets.

Early last year, before the pandemic hit Houston, a capital campaign called “Reimagine Donovan Park” was launched with the goal of raising $1 million to redesign and rebuild the park. But Guyre said the pandemic and corresponding economic downturn impacted the initiative and the HHA in general, adding that the fundraising campaign for the park is “on hold.”

“We are in the regrouping phase,” she said. “The park will be reimagined one day.”

For now, the HHA and the neighborhood it serves are glad Donovan Park is open again and with some improved amenities. Guerra, who has two young daughters, said the playground “has a special place in everyone’s heart in this community.”

Honeycutt said the yearlong closure was “really hard” for her and her daughter, Emma, who tried to make up for lost time on Tuesday. So did several other kids who call the Heights home, including sisters Natalie and Simone Farath.

“We love it,” said their mother, Laura Farath. “It’s our favorite.”