Former Houston ISD trustee Rhonda Skillern-Jones, who served public schools in the Oak Forest area for the better part of a decade, pleaded guilty to federal conspiracy charges and admitted to accepting thousands of dollars in bribes as part of an alleged kickback scheme involving a school district vendor, according to a Thursday news release by the U.S. Department of Justice (DOJ).

The DOJ and U.S. Attorney's Office for the Southern District of Texas announced that former HISD chief operating officer Brian Busby, 43, and 60-year-old Anthony Hutchison, who was contracted by HISD to perform construction and grounds maintenance services, were arrested Thursday and have been indicted by a federal grand jury under charges of conspiracy, bribery concerning programs receiving federal funds and witness tampering. Hutchison also has been charged with wire fraud, according to the DOJ.

The indictment names Skillern-Jones, who served as an HISD trustee from 2012-19 and was board president in 2015 and 2018, and four former HISD employees as alleged co-conspirators. The DOJ said all five have pleaded guilty to conspiracy charges as part of plea agreements they entered, with each facing up to five years in prison.

Skillern-Jones, 39, who has served as a Houston Community College trustee since being elected to that role in 2019, did not immediately respond to a text message seeking comment.

“Today's arrests and related charges are the result of a lengthy, multifaceted FBI Houston investigation,” Richard A. Collodi, the acting special agent in charge for the FBI's Houston office, said in the news release. ”Houston taxpayers and the thousands of HISD students, along with their teachers and staff, are the potential victims of this alleged multimillion-dollar public corruption scheme. The FBI will continue to work to hold accountable public officials who fail the citizens of their community by accepting bribes, and those who pay bribes.” 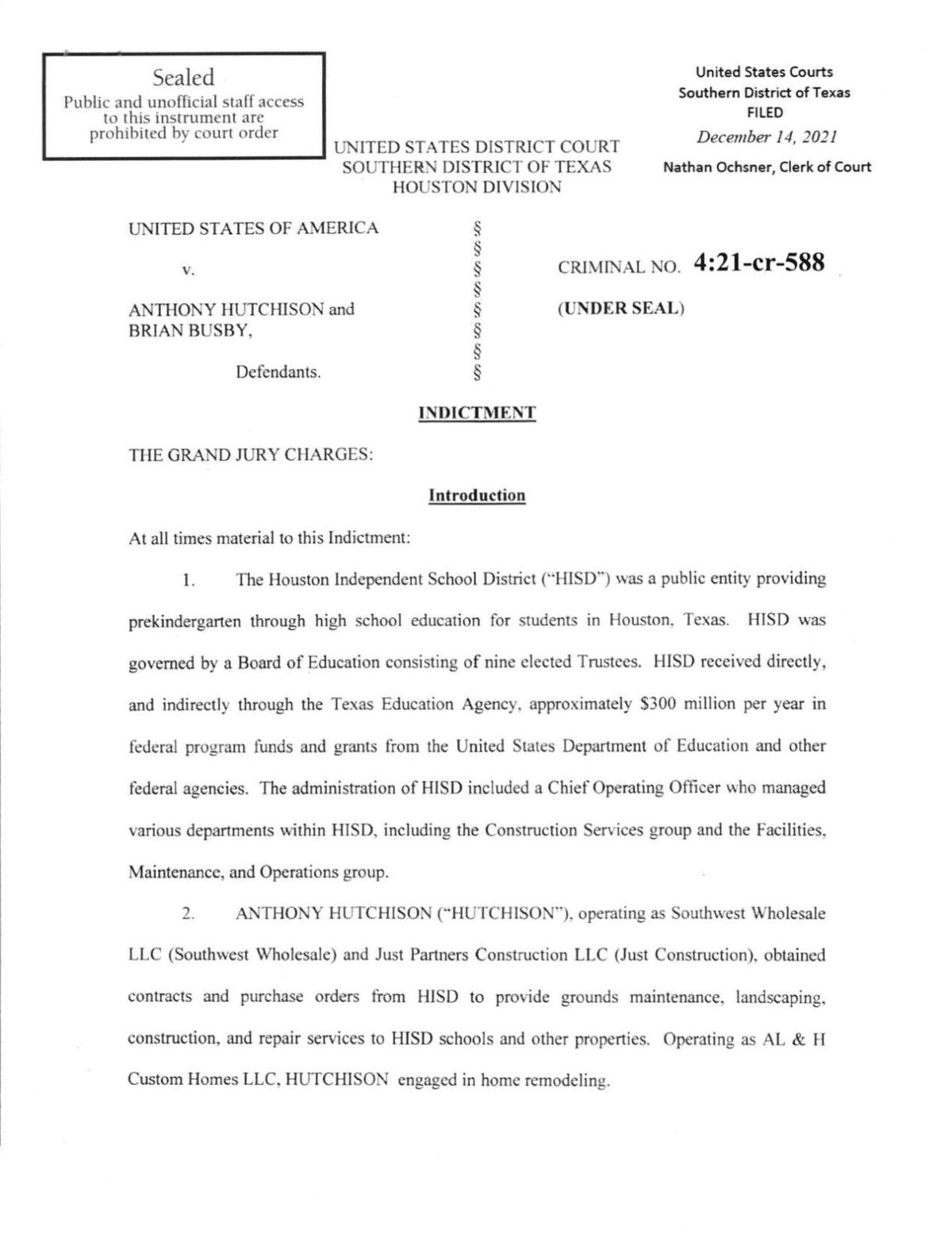 The indictment alleges that, from 2011 until 2020, Hutchison was contracted to provide grounds maintenance, landscaping and irrigation services at multiple HISD properties - including schools in the Heights, Garden Oaks and Oak Forest areas - and systematically overbilled HISD for grass-mowing jobs and playground mulch. Hutchison allegedly paid a portion of his boosted profits to Busby in the form of cash and free home remodeling, according to the indictment.

The indictment also alleges that Hutchison paid cash bribes to Skillern-Jones and the four former HISD employees in exchange for obtaining purchase orders for construction, repair, landscaping and maintenance jobs with HISD. The four former employees who entered plea agreements, according to the DOJ, are Derrick Sanders, who was HISD's officer of construction services; Alfred Hoskins, who was a general manager overseeing facilities, maintenance and operations; and area maintenance managers Gerron Hall and Luis Tovar.

Named in the indictment are multiple HISD schools where projects were performed as part of the alleged kickback scheme, including Browning and Durham elementary schools, Garden Oaks Montessori Magnet and Waltrip and Booker T. Washington high schools.

The FBI raided HISD headquarters, 4400 W. 18th St., in early 2020 while investigating the alleged kickback scheme. The DOJ said Thursday that more than $186,000 in cash was allegedly discovered by authorities during the execution of search warrants last year at the homes of Busby and Hutchison.

"No person charged in connection with the indictments announced today is currently employed by HISD," the school district added.