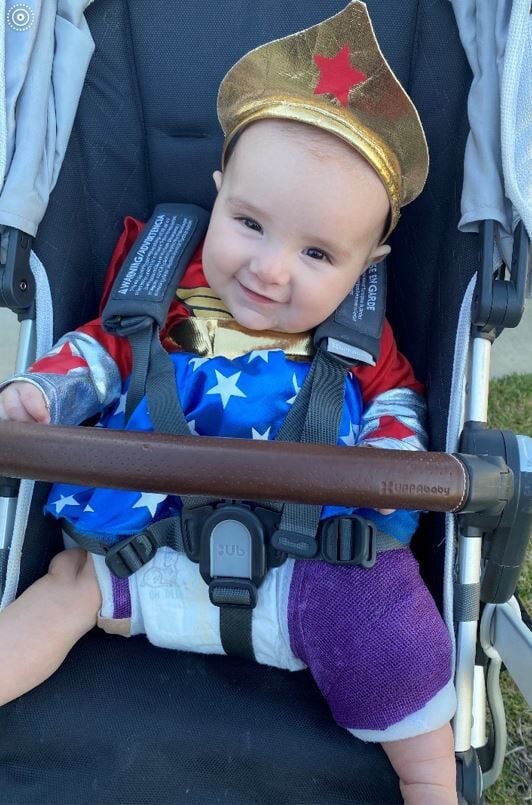 Rachel Zuvanich, who was diagnosed with hip dysplasia at about 2 months old, is on the mend in a SPICA cast and in good spirits. Her parents dressed her up as Wonder Woman for Halloween. (Photo by Christine Silva) 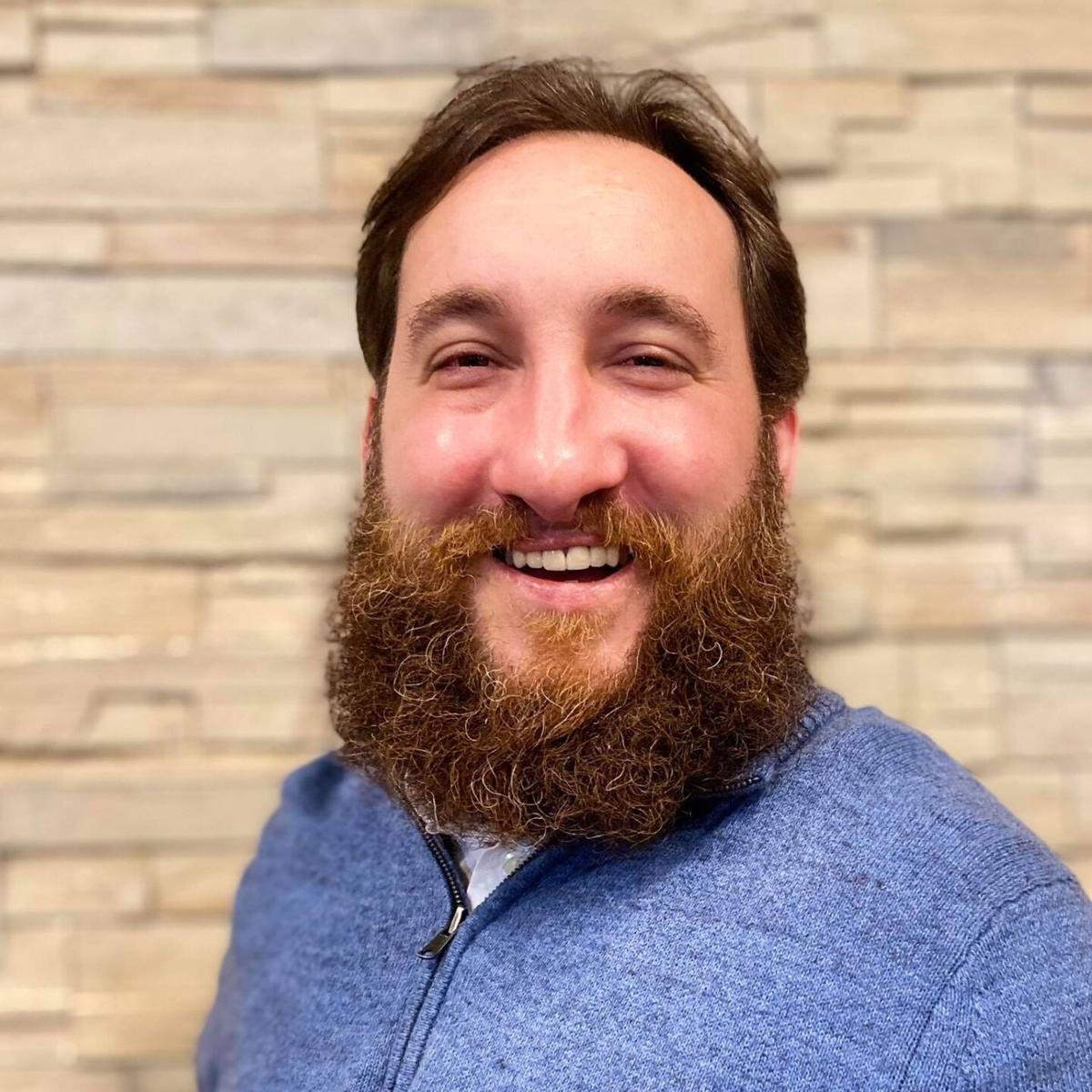 For her first Halloween, Rachel Zuvanich dressed up as Wonder Woman. It made for an incredibly cute costume for my 6-month-old daughter, and it could not have been more fitting.

Little Rae Rae, as we like to call her, has become a hero in the eyes of me, her mother, Christine, and her 22-month-old big brother, Pablo, who can’t quite comprehend what his baby sister has been going through but surely senses how strong she is.

Rachel was born with developmental dysplasia of the hip, which means one of her hips was out of the socket. This condition was discovered by her pediatrician through routine infant exams that revealed a clicking sound in her left hip, and an ultrasound when she was about 2 months old confirmed it.

It was devastating news for Christine and me, even though our baby girl seemed otherwise healthy and happy and was not in any discomfort or pain – at least not initially. And the prognosis for correcting the problem, to ensure she can grow up with a normal hip and be able to walk and run and jump around like any other kid, was encouraging and fairly simple – at least initially.

The first line of treatment for hip dysplasia, when caught early enough that babies’ bones are still forming and pliable, is typically a soft brace called a Pavlik harness that holds her legs in a frog-leg position. We were told by Rachel’s orthopedic doctor that about 90 percent of the time, spending six weeks in the harness causes the hip bones to fuse correctly and no further treatment is needed.

Well, after keeping our daughter in the brace for two weeks, which she seemed to be comfortable with, we took it off to give her a bath and noticed her left (affected) leg was stuck in that frog-leg position while her right leg moved freely and normally. This was even more alarming to her parents than the initial diagnosis, because we feared something might have been permanently damaged.

As it turned out, Rae Rae experienced a rare Pavlik harness complication called femoral nerve palsy, which isn’t as bad as it sounds. Keeping the leg flexed upward can occasionally put stress on the femoral nerve, which allows someone to kick their leg out at the knee.

The condition resolved within a few days once the harness was removed, which was good, but the complication meant that the harness likely would not work, which was bad. So Rachel was prescribed another brace, called a Rhino Brace, which is more rigid than the Pavlik but still considered a soft brace.

Unfortunately, we couldn’t get her in the dang thing without her screaming bloody murder, and the brace wasn’t fitting properly because it seemed like Rachel did not want her hip to be placed in the proper position. It hurt her, which hurt her parents and made us again think that something had gone terribly wrong.

We were told by the doctor that these soft braces do not cause pain or discomfort, but that was clearly not the case for our little girl. The ligaments in her hip had tightened over the course of a few weeks, and the doctor now had difficulty manually putting her hip in the socket.

We went ahead and tried the Pavlik again for another week, but now it wasn’t properly placing the hip like it had done initially. So the doctor recommended a procedure called a closed reduction, in which Rachel would be sedated with anesthesia before having her hip placed in the proper position. Then she would need to be put in a SPICA cast - which covers the mid-section as well as the thighs of both legs - to hold everything in place for long enough for the bones to fuse.

As you might imagine, this was not a welcome development for Rachel's mother and me. We were frightened by the idea of putting our daughter to sleep at such a young age, and the thought of having her in a cast for three months did not sound any more appealing.

So we sought a second opinion, which unfortunately was the same as the first. So we went back to our original orthopedic doctor and scheduled the closed hip reduction procedure, which happened early on the morning of Oct. 21.

It was a long, stressful day at the hospital that almost went awry again. The closed reduction went well in terms of hip placement, and our baby girl awoke from the anesthesia without any problems, but the initial post-operation MRI revealed that blood was not flowing to the ball of Rachel’s femur, which could lead to an even more debilitating complication caused avascular necrosis, in which the tissue eventually dies and a total hip replacement would be in the cards.

We prayed and asked everyone we knew to do the same while awaiting the results of a subsequent MRI that would hopefully reveal that blood was now flowing throughout the femur and we could take our daughter home to rest. If not, they would have to cut off the cast, send us home and schedule an open reduction, which is a full-blown operation that would require more anesthesia and incisions.

I’ll never forget seeing the doctor a few hours later as he walked toward us with both thumbs up. Blood flow had returned, which is what the doctor had been hoping to see, so the procedure was considered a success.

Even more comforting, and rather surprising, was Rachel’s demeanor through it all. Instead of being sore and angry in the hours after the procedure, she seemed comfortable, content and even happy at times. She kept falling asleep and sucked down as much milk as we could give her.

Thankfully, and remarkably, our sweet baby Rae Rae has continued to be in good spirits in the two weeks since the closed reduction. She only cries when she’s hungry or wants attention, and she might even be adjusting to the cast better than her parents – who absolutely hate changing her diapers.

That’s partly why we decided to dress her up as Wonder Woman, because she’s a true hero even though she can’t yet walk or talk. She smiles a lot and laughs a little, too, which melts our hearts and makes us feel lucky for modern medicine and our support system of family and friends.

We’ve got another two-and-a-half months in the SPICA cast, and we’re holding out hope that all will be well and healed once it’s removed. And we’re coping well by following the lead of our precious little girl, who might the strongest one in the family even though she’s the smallest and the youngest.