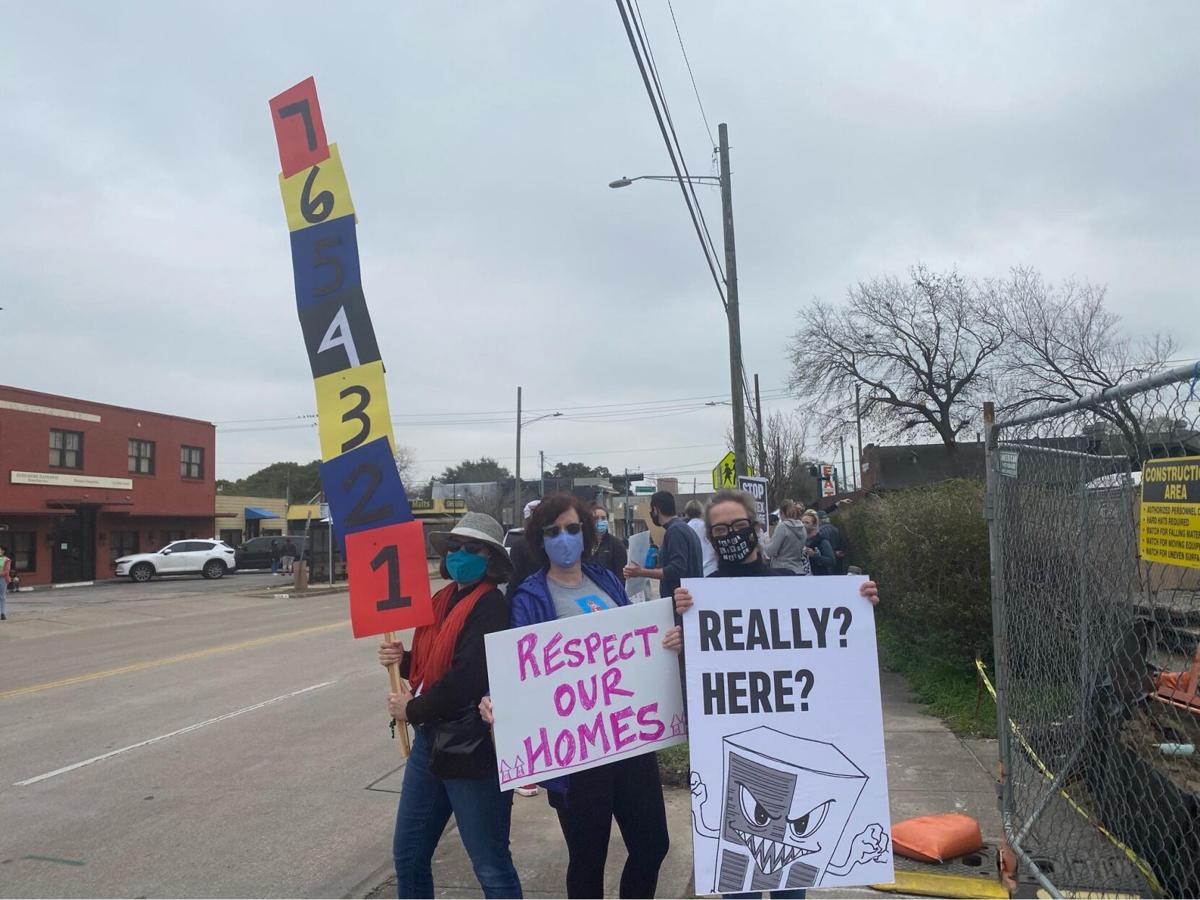 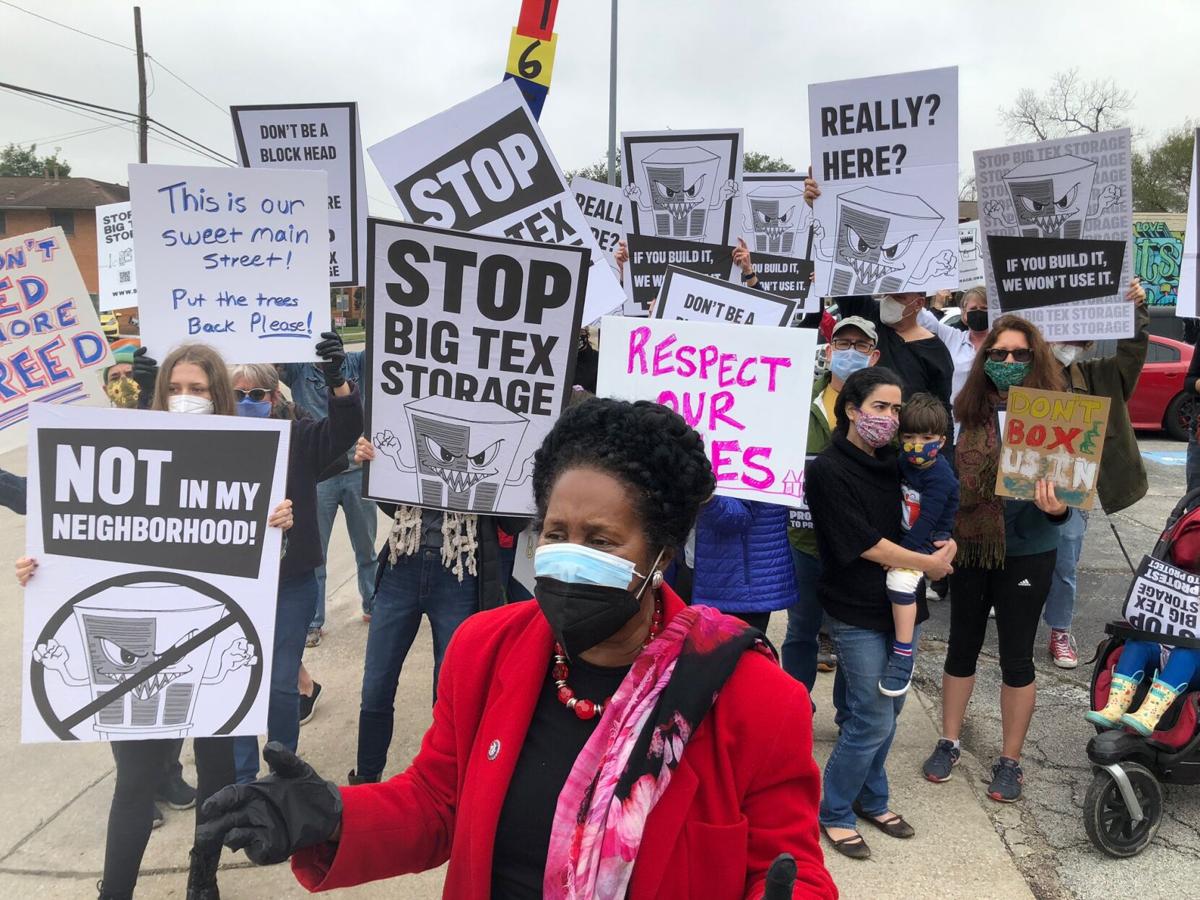 Heights residents picked up a heavy hitter last weekend in their ongoing fight against a seven-story storage facility planned for the neighborhood. But after the owner of Big Tex Storage reached a compromise of sorts with the Houston Heights Association (HHA), preventing the business from setting up shop on East 11th Street appears to be a long shot.

U.S. Rep. Sheila Jackson Lee, who represents the Heights as part of Texas’ 18th Congressional District, joined about 50 protesters who gathered last Saturday near the under-construction property at 730 E. 11th St. They carried handmade signs, chanted and expressed their opposition to Big Tex Storage, which is in the process of building a self-storage facility at the former site of a historic theater and church that was demolished in December.

“I was glad to join Heights residents protesting to preserve the historic culture and architecture in the Heights neighborhood,” Jackson Lee wrote on Twitter. “We will move forward with our fight against the development of an eyesore building on the main thoroughfare in the Heights that was forced upon local residents with no input and complete disregard for the Heights’ history and culture.”

Jackson Lee told her fellow protesters she would reach out to the developer and “see what could be worked out,” but it’s a local property matter that may be out of her hands as a federal lawmaker. Property owner Bobby Grover of Grover Ventures had met earlier in the week with the HHA, an organization that serves both residents and businesses in the neighborhood, and the HHA said in a statement Wednesday that Grover committed to tailoring the facility to make it more compatible with the character of the neighborhood.

But the HHA said Grover was unwilling to budge on his plan to make the storage facility seven stories in height. The HHA said it left the meeting with “varied levels of comfort” with other aspects of the project, such as Grover’s plan to reduce the amount of metal siding compared to other Big Tex Storage facilities in Houston, to locate parking in the back of the facility, provide privacy for backdoor neighbors and leave the adjacent alley intact, to mitigate flooding risks, traffic volume and sound and light pollution, to address safety and crime concerns and to make the facility pedestrian and cyclist friendly. The HHA said Grover also expressed an interest in enlisting a local muralist to create artwork on the property.

“We let him know our preference is for him to build a shorter building that would be more in scale with our neighborhood, but unfortunately that is not possible due to the number of units required,” the HHA said. “… While he is not making any concessions on the size of his building, we feel like we were able to establish a middle ground on certain aspects of the design.”

Houston does not have zoning laws, and the property is outside of the Heights’ city-designated historic districts, meaning developments there are not required to adhere to the design standards of a historic district.

Margaret Wallace Brown, the director of Houston’s Planning & Development Department, said earlier this month that the property owner had followed all the city’s rules for development and nearly completed the permitting process. She added, “There is nothing that will stop him unless he decides not to do this.”

Grover indicated he intends to move forward with the development in a statement provided to The Leader on Tuesday. But opponents of the project – including the nearly 5,000 community members who have signed an online petition called “Stop Big Tex Storage” – have at least gotten his attention.

“I understand the concerns of those who showed up and signed the online petition and I remain committed to becoming a responsible and positive business for the Heights,” Grover said.

Two of the petitioners, Heights residents Fred Lindner and Viula Torgerson, said they oppose the Big Tex Storage development because it is not compatible with the scale of surrounding buildings and does not fit with the pedestrian-friendly aesthetic of the neighborhood. The city plans to add bicycle lanes to that stretch of 11th Street while reducing the number of vehicular lanes from four to either three or two, depending on the intersection.

Grover said Big Tex Storage will comply with the city’s transit-oriented development rules and a “good number” of its pedestrian-friendly guidelines. Still, Torgerson characterized the planned facility as a “giant, corrugated, windowless bunker.”

“The petition should be seen by Bobby Grover as a de facto boycott of his business,” Torgerson said. “That’s 5,000 immediate stakeholders, people who live around that location that refuse to use his business. And he can’t even hope to pull people from other parts of the community. If you look around, within a 5-minute drive, there’s 16 other storage units available. He’s not offering anything so special. You don’t get a free cocktail and concierge services to move your stuff in.”

Even if the Heights is stuck with a Big Tex Storage facility, the outcry of neighborhood residents could have a tangible effect. Jackson Lee said city leaders should consider adopting a compatibility or quality-of-life ordinance that would provide neighborhoods with increased protections from unwanted developments, adding that zoning “may be something we have to look at.”

Torgerson said demonstrations such as last Saturday’s could end up having a similar impact.

"The Houston Heights Association met with Bobby Grover to better understand his plans for the Big Tex Storage facility. Our meeting began with us being informed that this project is going to happen and the structure will be 7 stories in height. We let him know our preference is for him to build a shorter building that would be more in scale with our neighborhood, but unfortunately that is not possible due to the number of units needed. We were shown the site plans and were pleased to see that this structure will look somewhat different from his other properties and will not have as much metal siding. The parking will be located in the back of the property, and he wants to keep the alleyway intact. He explained his plans for drainage, traffic volume, sound and light pollution, safety and crime concerns, and privacy for the backdoor neighbors, and we had varied levels of comfort for each topic. The 11th Street Bikeways plan was discussed, and Mr. Grover assured us that he has plans to provide a pedestrian and bicyclist friendly realm, and even hinted at the possibility of a bicycle fixit station. He expressed an interest in partnering with a local muralist, and we were able to make a connection for him. At this time, we are unsure of any definite plans. As the meeting was wrapping up, Mr. Grover said he wants to be a good neighbor and support our future initiatives. While he is not making any concessions on the size of his building, we feel like we were able to establish a middle ground on certain aspects of the design."

I understand the concerns of those who showed up and signed the online petition and I remain committed to becoming a responsible and positive business for the Heights.

I had a very productive meeting and follow up conversation with members of the Houston Heights Association.  I appreciate their candor and willingness to have an open and honest conversation about the misconceptions of a class-A storage facility, how high land prices directly effect a development, the future of 11th street and improvements to the alley.

Changes based on community feedback:

I have been listening throughout this process and it’s important residents of the Heights know that this development will comply with the City of Houston’s Transit-Oriented Development Rules as well as a good number of the Walkable Places standards approved by the Committee.

Last week, the longtime home of Resurrection Life Fellowship, a church at 730 E. 11th St., was demolished. The website for the Texas Department of Licensing and Regulation’s Architectural Barriers Projects listed a forthcoming seven-story, self-storage facility project from Big Tex Storage to start construction in March and finish in January 2022. While the news […]

There is a two block gap between the historically protected Woodland Heights and the Historic Heights. This building is going in that gap. If you’ve ever wondered what the protected sections would look like without the protections - THIS IS IT.