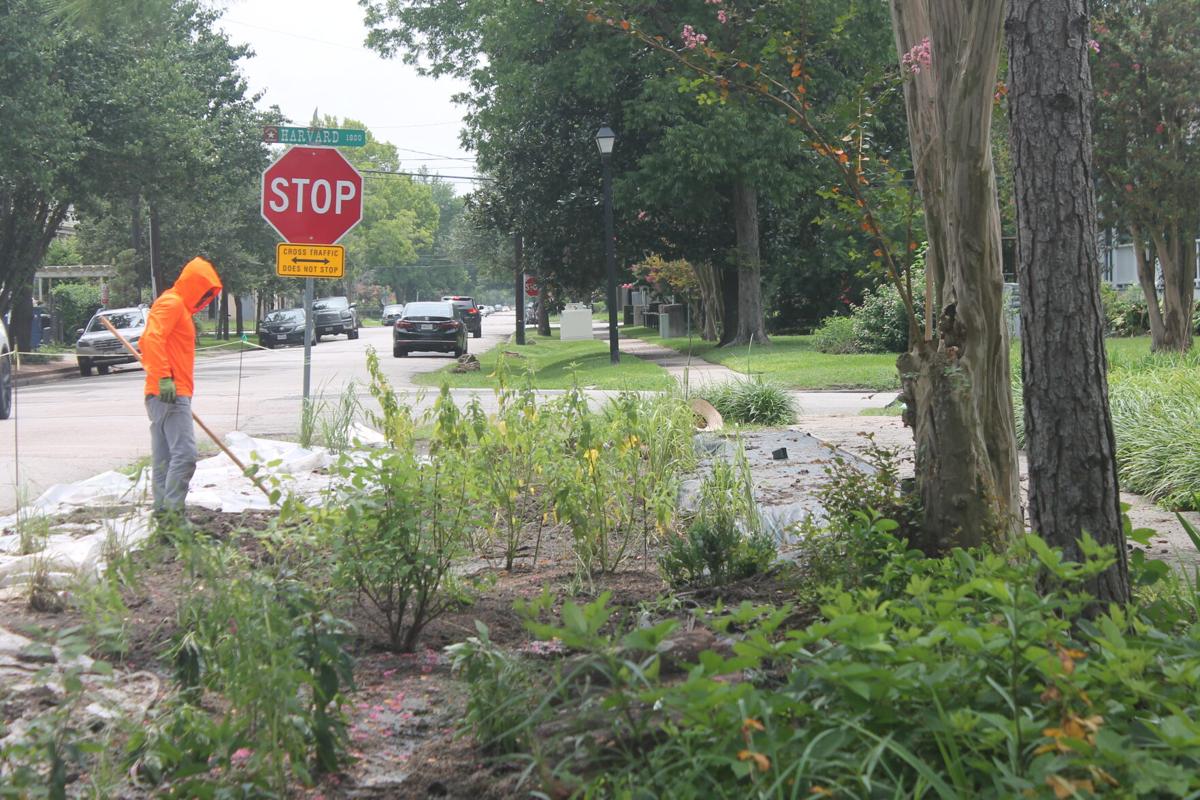 A landscaper works on a rain garden in the ditch south of 1802 Harvard St., a historic and iconic Heights home. Owners John and Jan Rynda Greer have sought to improve the property since buying it in 2019. 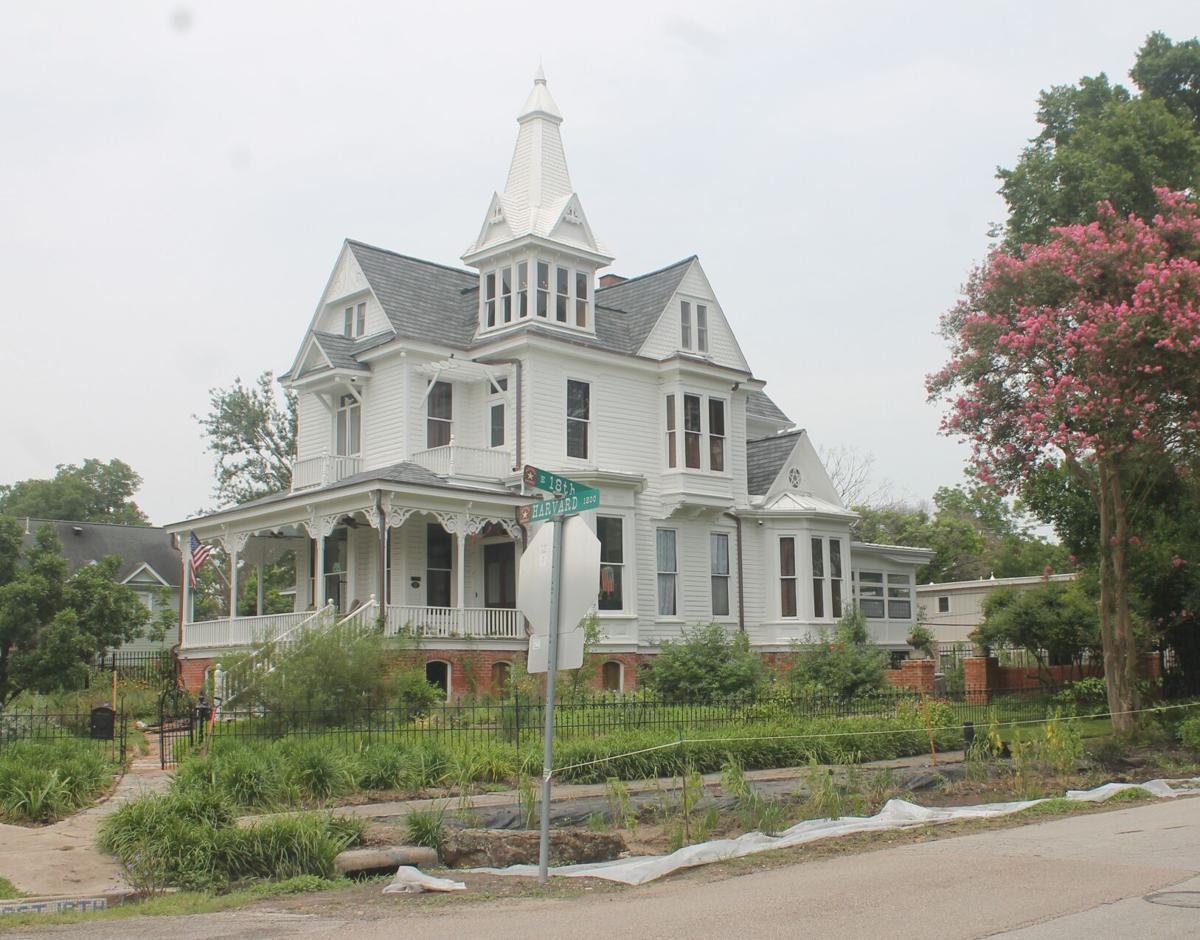 Living in the most recognizable home in the Heights could be considered an honor and a privilege.

Jan Rynda Greer has come to find out it’s also a lot of work and comes with a lot of responsibility. And because of its visibility in the neighborhood, the Victorian mansion at 1802 Harvard St. is a target of scrutiny.

Since purchasing the historic house in March 2019 from the estate of prominent Houston preservationist Bart Truxillo, who lived there for nearly 30 years until his death in 2017, Greer said she and her husband, John, have worked to restore and upgrade the property that includes a guest house, basement, swimming pool and spacious lawn and gardens. The effort was temporarily derailed by Tropical Storm Imelda in September 2019, when Greer said the home flooded.

Partly in response to that event, the couple is in the process of creating a rain garden on the south side of the property, in the ditch between the sidewalk and East 18th Street. Its aim is to beautify the ditch along with capturing stormwater runoff and slowing its flow to a gutter immediately to the west, thereby reducing flooding risks.

“Everything on this property has been built with the idea of longevity,” Greer said. “Our eyes are open to the fact it’s going to be hotter and colder, more lightning, crazier storms, more hurricanes and how we have to adjust the landscape and the house itself to survive for another 100 years – without bankrupting us.”

Even though the ditch along 18th was filled with vegetation when Truxillo owned the property, the City of Houston received complaints about the rain garden as it began to be constructed. Houston Public Works spokesperson Erin Jones said a trio of 311 requests have been submitted since June, alleging that the rain garden impeded drainage and was a street hazard.

Jones said property owners are required by city code to maintain roadside ditches and ensure they are clear of anything that could block or impede drainage as they are in the city’s right-of-way. Any modifications to them, including plants and soil, must be submitted to the Office of the City Engineer for review, Jones said.

The Greers did not submit their plans to the City Engineer prior to beginning construction on the rain garden – Jan said she wasn’t aware she needed to – but a public works employee inspected the site Tuesday. According to Jones, there appeared to be no problems with the rain garden beyond the presence of a rock at its western end, which could be removed.

“I don’t think it’s going to be much of an issue,” Jones said. “If anything, it’s just making adjustments to the garden, not getting rid of it, just to make sure it all works.”

Greer said she was “thrilled” to find out her rain garden was approved by the city, adding that she was prepared to push back if it had not been. She said the ditch previously was filled with invasive plant species such as canna and crinum, which had grown into the storm drain and had to be removed.

The rain garden was designed with the input of longtime Heights gardener John Gardner, and Greer said the center of it includes drought-tolerant water plants such as woolly rose mallows and white-topped sedges, which grow deep roots and have colorful white flowers that shine in the twilight.

Gardner said the early returns have been good, with the nascent garden withstanding the test of some recent heavy rains.

“It is at least as good as it was, and I think it’s improved,” he said. “If problems develop, we move a plant or dig a deeper ditch.”

After the complaints were lodged through 311, Greer said she reached out to Houston City Council member Sally Alcorn for assistance. In a statement provided to The Leader, Alcorn said residents should seek approval from the City Engineer’s office before making changes to roadside ditches, but she also supports the rain garden at 1802 Harvard.

“I applaud Ms. Greer’s initiative in planting a rain garden,” Alcorn said. “I’m a big proponent of green stormwater infrastructure like rain gardens and bioswales and encourage residents to build their own.”

Greer said she hopes her rain garden will inspire others to undertake similar projects and that her experience with the city serves as somewhat of a guide on how to navigate the process. There already are rain gardens in other Heights ditches, according to Gardner.

The rain garden on the Greers’ property is merely part of their overall effort to make sure their iconic home, which is on the National Register of Historic Places, remains a treasure within the Heights and Houston as a whole. In the interest of visual appeal, ecological considerations and environmental friendliness, they also have worked on the gardens in the front and side portions of the property, which are frequented by bees and butterflies.

The Greers, who because of the flooding caused by Imelda had to live in the guest house during their first six months as residents, also have resurfaced the driveway in the back of the property and the area surrounding the pool.

“We’re like adventurers, and to live in a house that’s its own adventure is what makes sense for us,” Jan said. “There are definitely times where we get overwhelmed, but the constant process is what fulfills us and excites us.”