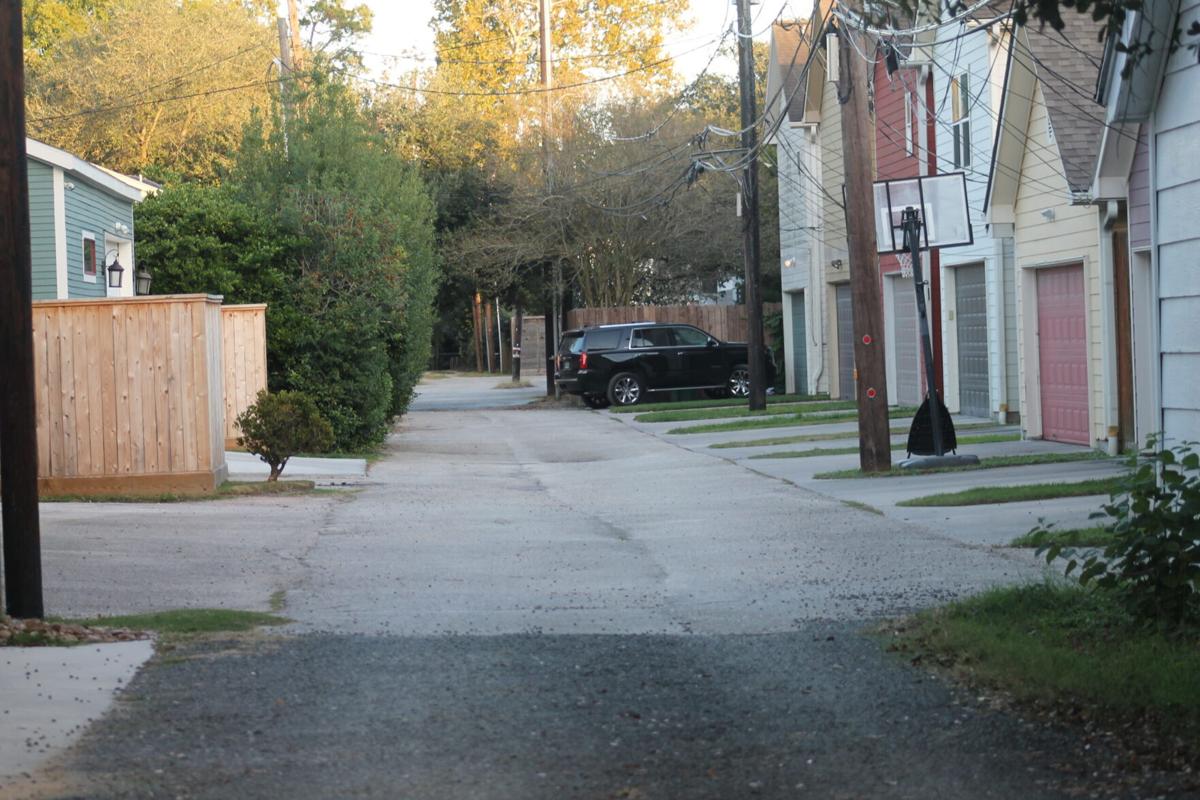 The City of Houston owns the alley that runs from Nicholson to Ashland streets between West 21st and West 22nd streets, according to the Harris County Appraisal District. The city does not claim ownership of most of the alleys in the Heights. (Photo by Adam Zuvanich) 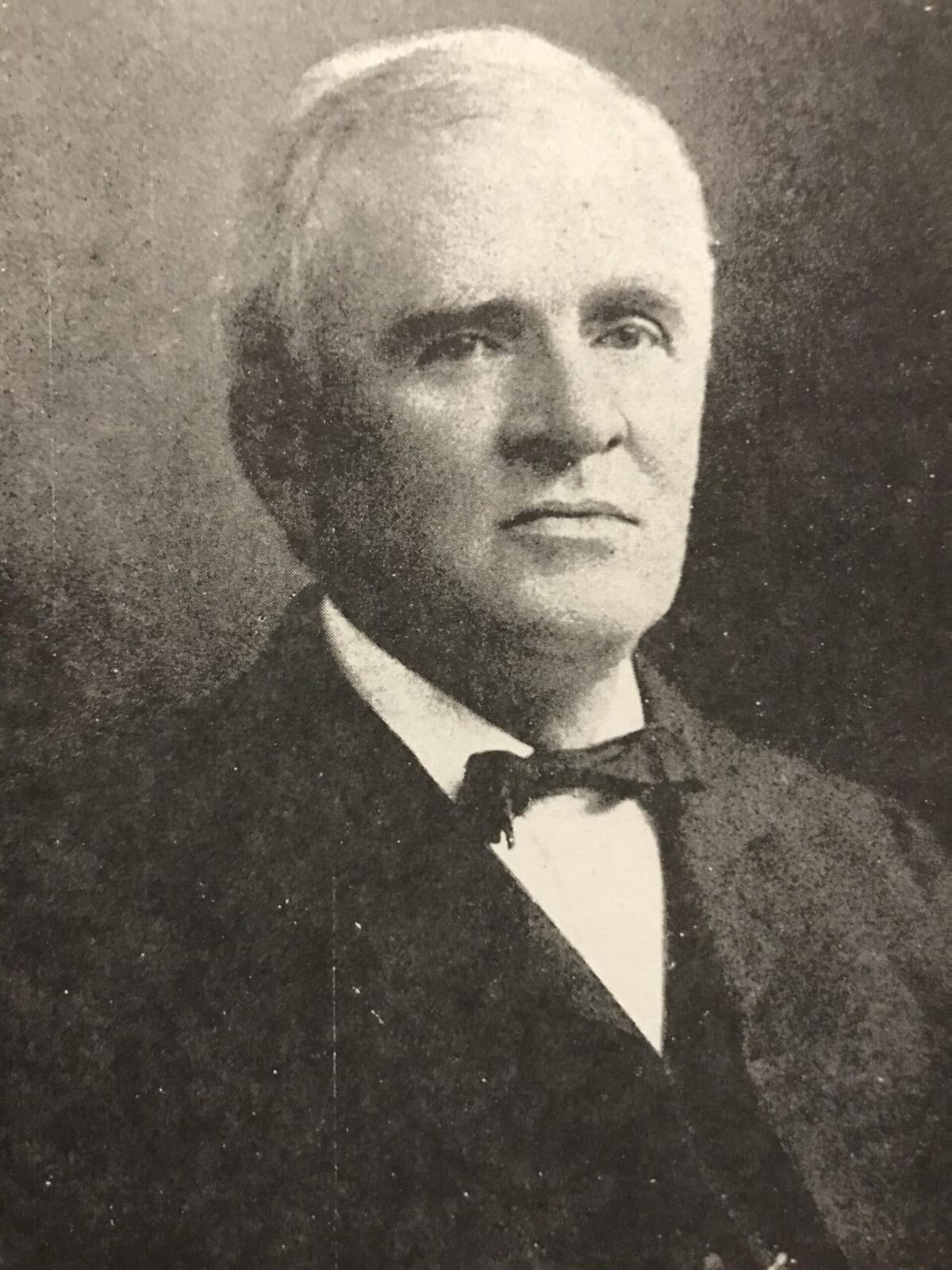 O.M. Carter co-founded the Heights in the late 1800s, and his heirs might have an ownership stake in the neighborhoods’ streets and alleys. (Photo courtesy of Randy Pace) 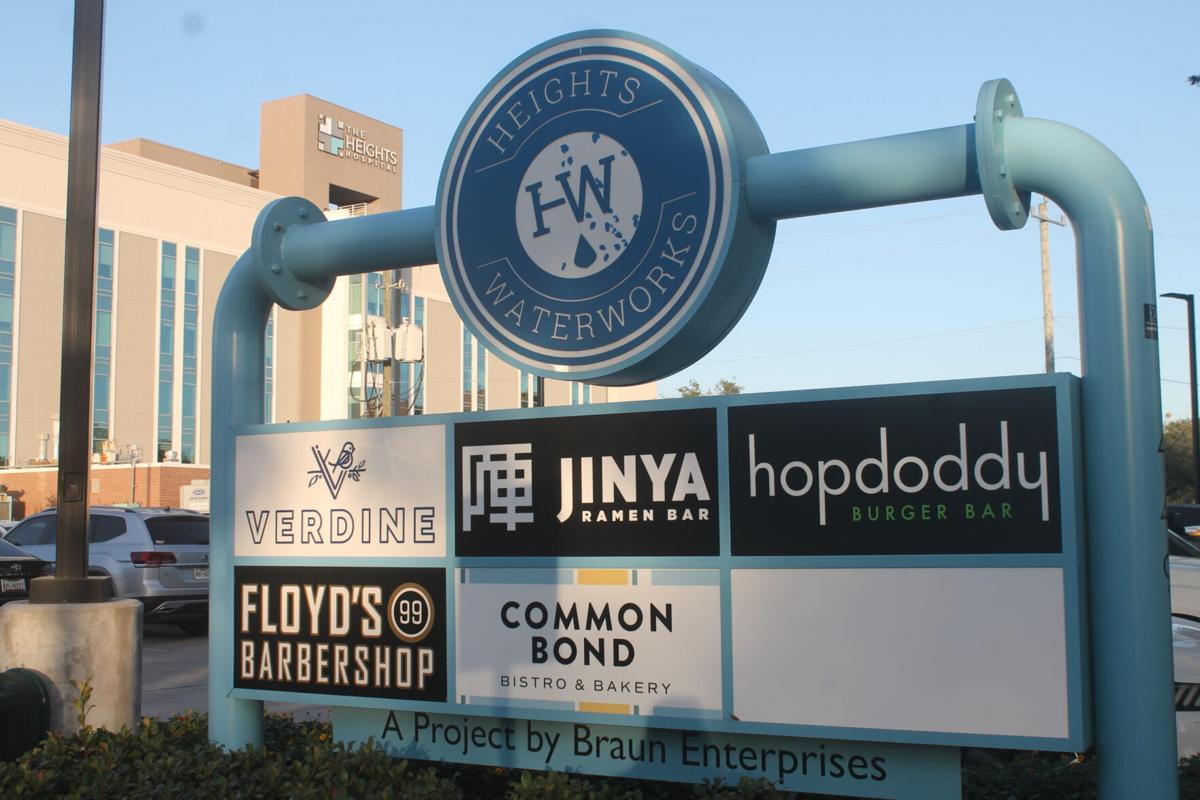 The City of Houston once owned the property that is now the Heights Waterworks development at 449 W. 19th St. Before selling the land to a developer, the city was granted ownership rights in part of the property from four heirs of Heights co-founder O.M. Carter. (Photo by Adam Zuvanich) 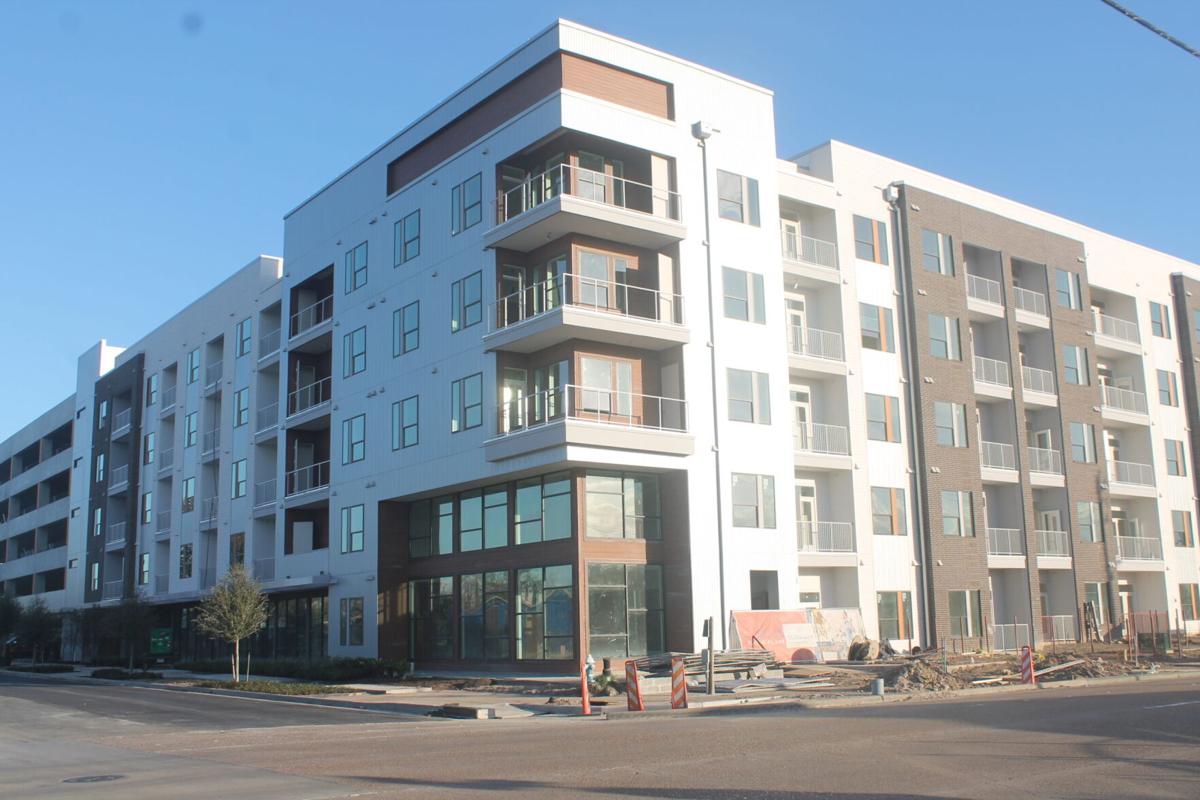 Slate Heights’ Durham Heights development at the northeast corner of Durham Drive and West 25th Street includes property that was granted to the company by four heirs of Heights co-founder O.M. Carter. (Photo by Adam Zuvanich) 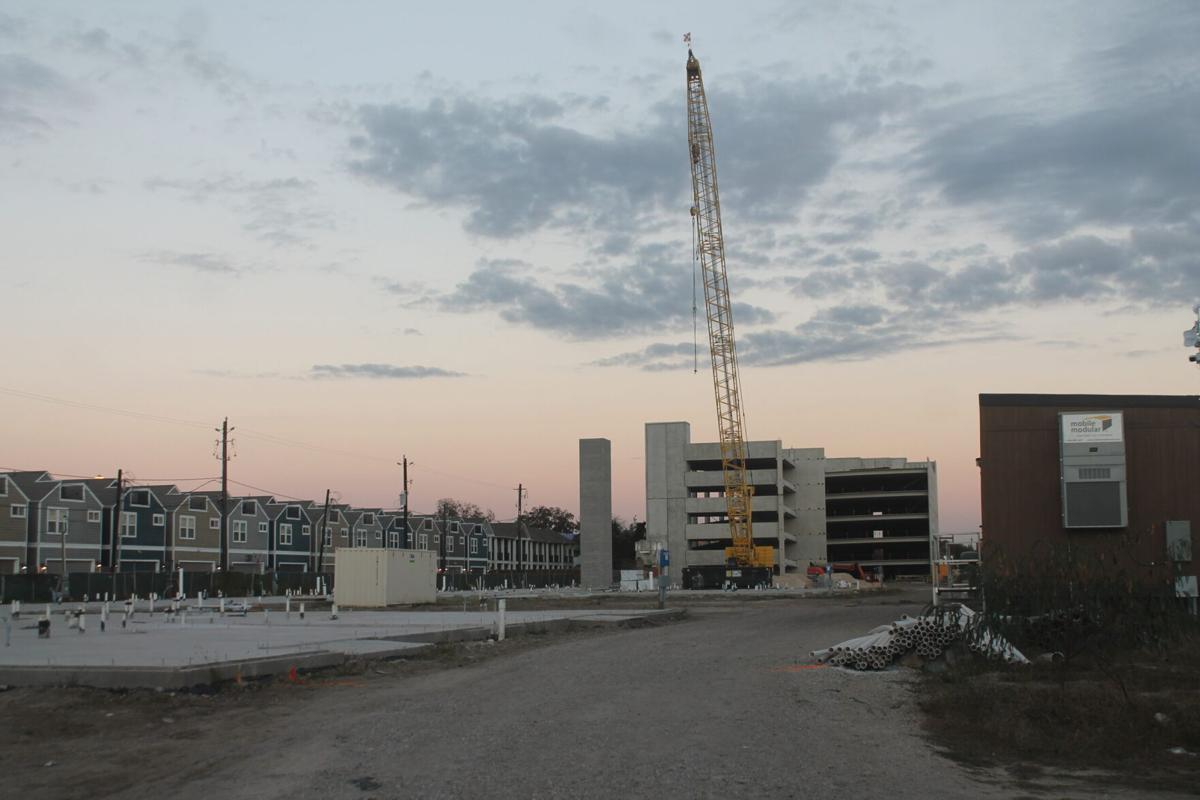 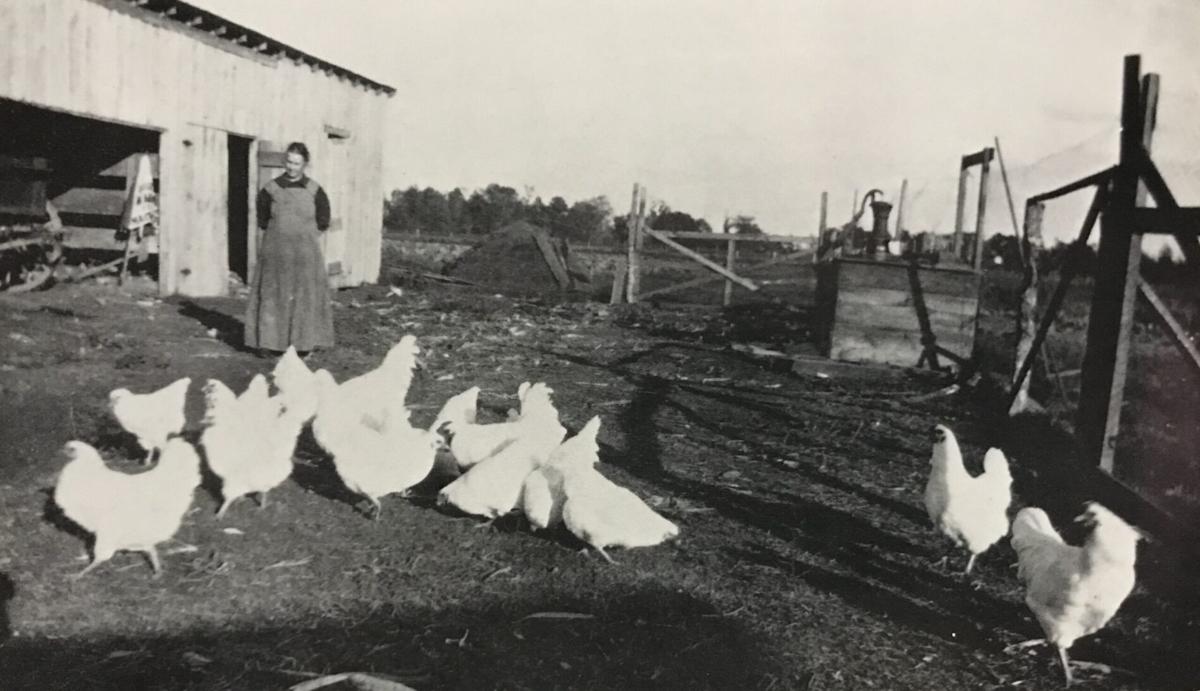 A Heights property in the late 1800s more closely resembles farmland than an urban setting. (Photo courtesy of Randy Pace)

Editor’s note: This is Part II of a series about Heights alleys. Read Part I here.

The City of Houston does not claim ownership of most of the alleys in the Heights and has told residents it is not responsible for maintaining them. That chore is left to abutting property owners, they’ve been told, but they don’t own the alleyways, either.

So if Heights homeowners and businesses do not own the alleys behind their properties, and neither does the city in which they reside and pay taxes, then who does?

The path to answering that question winds well beyond the city limits and even outside the state of Texas. Rightful ownership might rest with a mother and son in Pennsylvania and her two other sons in Michigan and Nevada, because they are descendants of the man who helped create the Heights nearly 130 years ago.

Anne Good of Wyndmoor, Pennsylvania, is the granddaughter-in-law of the late O.M. Carter, who co-founded the Heights in 1892 and wrote in his original plat that ownership of the neighborhood’s streets and alleys were to forever remain with him, his Omaha & South Texas Land Company and their “successors, heirs and assigns.” Good’s three adult sons – Carter, John and William – are the great-grandsons of the Heights founder.

Harris County real property records show all four heirs have signed quitclaim deeds within the last few years to grant their rights, titles and interests in some of the Heights alleyways – if they have any – to three different corporations as well as to the city. The Goods’ Houston attorney, Randall Luckey, said he does not know which alleys his clients may own or partially own.

“If they have some rights, which they may, we’re certainly not going to do anything to give up those rights,” Luckey said.

Luckey said his clients did not know about their potential ownership stakes in the Heights alleys until they were contacted by the city in either 2015 or 2016. He also said he and the Goods have since “taken all our cues” from the city and have not independently investigated the merits of their ownership or if there are other heirs to Carter and his company.

Luckey said it is unclear if the city has ever accepted a dedication of the Heights alleys or subsequently abandoned them. He said the city, which annexed the Heights in 1919, has had a “shifting legal position over the years” as it applies to the neighborhood’s alleys.

The Houston Press reported in 1998 that Don Cheatham, the senior assistant city attorney at the time, wrote an interoffice memo in 1997 that said the Heights alleys were not public and therefore not under the purview of the city. But a year later, the publication reported, then-City Attorney Anthony Hall reversed Cheatham’s decision and declared the alleys to be public.

The Office of the City Engineer presently accepts only three Heights alleyways as public-use alleys it is responsible for maintaining – in the 300 blocks of West 19th and West 20th streets between Rutland and Ashland streets as well as in the 600 block of West 20th between Lawrence Street and North Shepherd Drive. The rest of the Heights alleys are considered private by the city, which since Jan. 1, 2017 has owned the alley that runs from Nicholson to Ashland streets between West 21st and West 22nd streets, according to the Harris County Appraisal District.

“It’s a legal morass, I‘ll tell you that,” Luckey said. “It would take a lot to figure out exactly what’s going on. It’s changed so many times. I don’t have any clue.”

Dealing with the city

City Engineer HoJin Lim described Heights alleyways as “very tricky,” saying the underlying fee is owned by the Carter family. When asked to expand on the ownership issue, he deferred to the city’s legal department, saying, “They have more of a history on the alleys in the Heights.”

Requests to interview a city attorney familiar with the Heights alleys were not granted by the city. Emailed questions about ownership of the Heights alleyways, the city’s position on the issue and its real estate transactions in the neighborhood – sent to three city attorneys as well as the public information officers for Mayor Sylvester Turner, Houston Public Works and the city’s real estate division – were not answered by press time.

The city’s apparent stance on Heights alleys seems to have shaped its current policies regarding their use and had an impact on real estate development in the neighborhood. County real property records show the Goods quitclaimed alleyway property to the city in October 2017, and the city subsequently sold that property as part of a larger plot to Alliance Residential Company. Alliance in turn sold the land to Braun Enterprises, which then developed it into what is now the Heights Waterworks – which includes restaurants and a barber shop – at 449 W. 19th St.

Real property records show the Goods also quitclaimed Heights alleyway properties to JPMorgan Chase Bank in September 2017, to CSRP, Inc. in March 2019 and to Slate Heights LP in April 2019. The latter two companies are using those tracts of lands as part of multi-family residential developments that are under construction, with CityStreet Residential Partners (CSRP) developing the Domain Heights at 2519 Rutland St. and Slate Heights developing the Durham Heights apartments on the east side of Durham Drive between West 25th and West 26th streets.

Someone familiar with one of those developments, who asked to remain anonymous, said the city required that quitclaim deeds be obtained from the Carter heirs, which represented a change in stance on the part of the city. The person said developers could previously abandon Heights alleyways through the city’s Joint Referral Committee, and without quitclaim deeds from the Carter heirs, for “decades.”

“Like so many other things, you’re at their mercy,” the person said of the city. “If they want to change the rules, they change the rules. You’ve just got to go along with it.”

Harvard Heights Construction owner Mike Shelton, who has built garage apartments in the Heights since 1998, said the city had a simple, longstanding process for approving construction permits for buildings that required access from a Heights alleyway. Shelton said he would send the city an email with his construction plans and a photo of the alley to be used, and the permit was often approved within a matter of a few days.

But starting in the summer of 2019, he said the city began requesting that the alleys’ drainage infrastructure and entryways be upgraded to meet city code, at the cost of the applicant, before those permits would be approved. The policy change was implemented by then-City Engineer Joe Myers, who wrote in an Aug. 16, 2019 memo that, “The Office of the City Engineer has been working with the City Attorney’s Office to determine the best course of action.”

Lim, who took over as city engineer in January, said his department has developed a temporary, case-by-case review process for granting construction permits for buildings that require alleyway access. He said the city’s authority over the Heights alleys stems from its responsibility to enforce ordinances related to stormwater drainage and to ensure alley approaches from streets are safe.

But Houston City Council member Abbie Kamin, who represents the Heights as part of District C, said the Office of the City Engineer has determined that encroachment issues in Heights alleyways are a “private matter between property owners, meaning the city would not get involved, unless any public utilities are impacted.”

“The city can’t have it both ways,” said a Houston real estate attorney who asked to remain anonymous. “Either the alley is public and the responsibility for the alley lies with our public government, or it is just private land to be used by private property owners.”

The 1892 plat of the Heights says its streets and alleys are “dedicated to the use of the owners of the property” in the neighborhood. It also says Carter, his company and their successors or assigns have the exclusive right to construct, operate and maintain all the utilities in the Heights’ streets and alleyways.

Sara Bronin, a Houston native and the chair in real property law at the University of Connecticut School of Law, said a Texas court of civil appeals nullified the utility restriction in 1907. A state court of civil appeals and a state district court also weighed in on Heights alleyway issues in 1930 and 1998.

Based on the three court cases and the original plat, Bronin said, “Except and to the extent the successors and assigns of Carter and the (Omaha & South Texas Land Company) have transferred the alleys to other owners, it seems that they still own them and have the responsibility to maintain and improve them.”

Kellen Zale, an associate professor of law at the University of Houston Law Center, reviewed the same cases and said it “appears unclear/dependent on further evidence as to whether the city or successors to the original developer own the alleys.”

Luckey said his clients, the Carter heirs, are “making no formal claims” to the alleys. He added that the “city is telling us that we have these rights.”

So is the city right in its determination?

“That might be a question for the courts to determine,” Luckey said.

At one point Park Blair wanted to buy up the whole block.