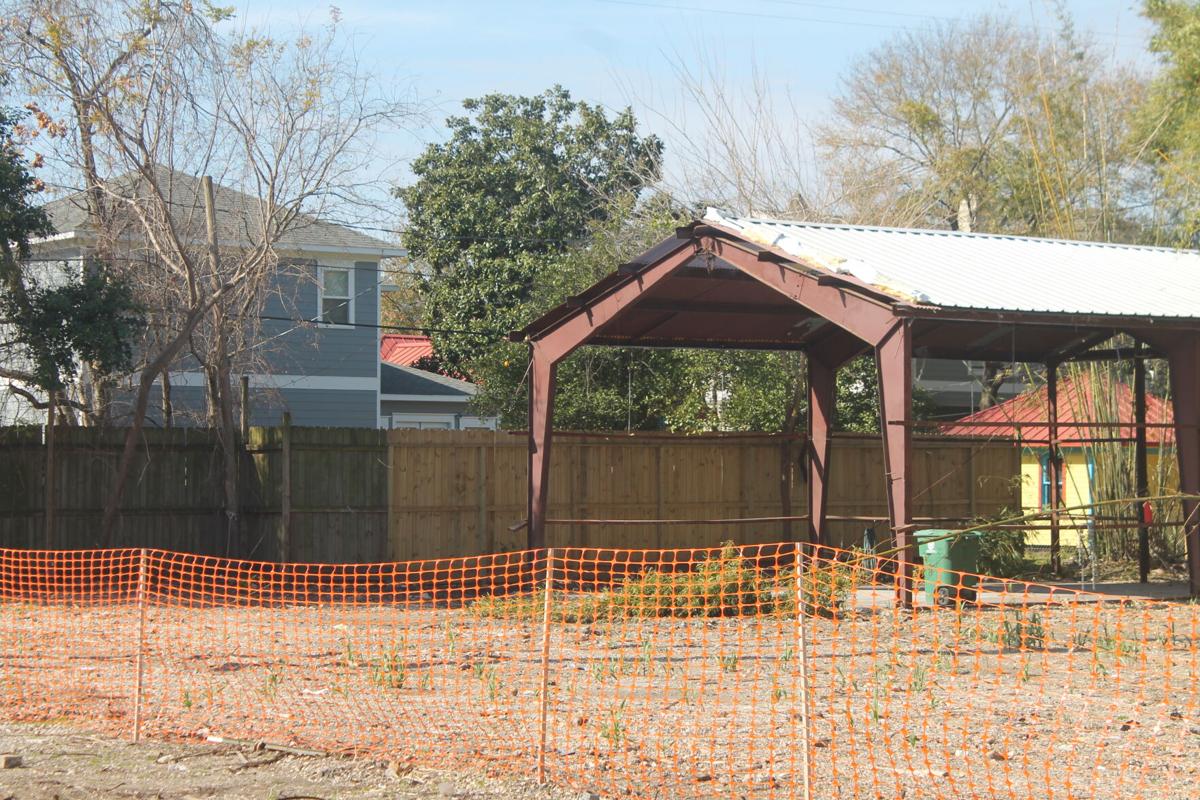 The property at 605 Columbia St., which neighbors some homes and the Heights Hike and Bike Trail, is being developed into a bar to be called Benny Thunders. (Photo by Adam Zuvanich) 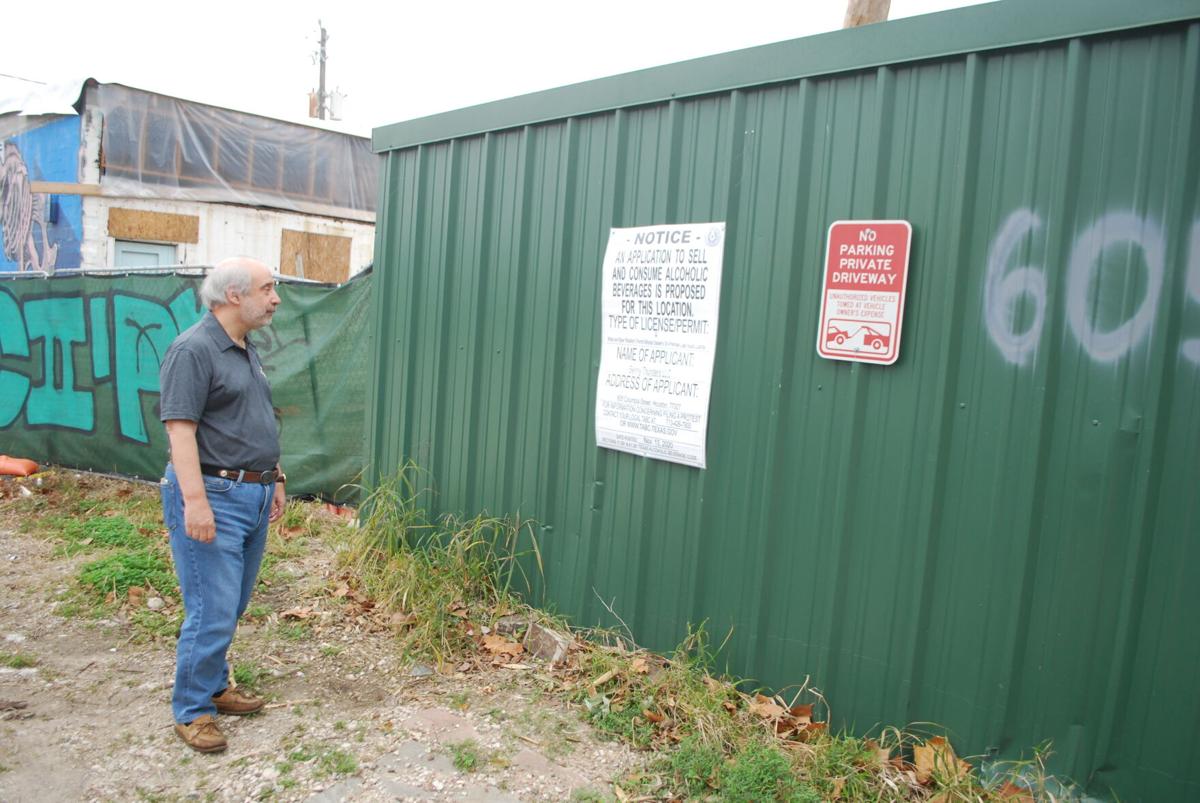 Heights resident Theo Lawrence reads a Texas Alcoholic Beverage Commission notice on a fence at the property at 605 Columbia St., which is being developed into a bar called Benny Thunders. (Photo by Betsy Denson)

The property at 605 Columbia St., which neighbors some homes and the Heights Hike and Bike Trail, is being developed into a bar to be called Benny Thunders. (Photo by Adam Zuvanich)

Heights resident Theo Lawrence reads a Texas Alcoholic Beverage Commission notice on a fence at the property at 605 Columbia St., which is being developed into a bar called Benny Thunders. (Photo by Betsy Denson)

A lot has changed in Theo Lawrence’s neighborhood in the past 10 years.

“My kid and I used to throw the ball up and down Columbia (Street),” Lawrence said. “There was rarely a car. Now there’s traffic up and down the street continuously.”

This is largely because his street intersects with White Oak Drive – and its numerous new restaurants and businesses, including bars. But Lawrence’s home – as well as part of White Oak Drive between Heights Boulevard and Oxford Street – is also part of the Houston Heights Historic District South as designated by the City of Houston. And he says he enjoys the safeguards such status provides.

So when Lawrence saw a Texas Alcoholic Beverage Commission (TABC) notice at 605 Columbia St. that a business named Benny Thunders LLC was planning to obtain a license to “sell and consume alcoholic beverages,” particularly a “wine and beer retailer’s permit & retail dealer’s on-premises late hours license,” he was alarmed.

“The potential noise and music pollution, drunks, and parking problems that an establishment like this can bring to a residential street is enormous,” Lawrence wrote in a letter to Houston City Council member Abbie Kamin, who represents the area as part of District C.

Lawrence’s concern is shared by nearby neighbors. Charles Dunham lives on Arlington Street, the next street over, near the Heights Hike and Bike Trail that runs behind the 605 Columbia property. Dunham said he bought the home five years ago to raise a family.

“When I invested in that area, I did it intentionally because it was an historic district,” Dunham said. “I was expecting that it would be protected.”

Benny Thunders is not the only new bar planned for the vicinity. There is documentation on the city’s Planning and Development Department website of Certificates of Appropriateness for both Benny Thunders and a new concept by Agricole Hospitality, referred to as EZ’s Liquor Lounge in planning documents, at nearby 3302 White Oak Dr., the 13-year home of Blue Line Bike Lab, which has closed and vacated the property. The two bars will back up to each other.

A Certificate of Appropriateness is required for projects that would alter the exterior appearance of a designated historic property.

Agricole’s Coltivare at 3320 White Oak Dr. is already nearby.

Dunham cites the lack of parking at that restaurant through variances they received as a particular problem for his street. He said the cars parking on the grassy area between the road and the drainage ditches made the area a mud pit and he even paid for a gravel parking space in front of his house.

“It is occupied every night the restaurant is open,” he said.

Both new bar owners said that although they have not talked directly with residents, they understand their concerns.

Matt Tanner with Agricole Hospitality confirmed they are leasing the building from George Kawaja to develop a “small quiet neighborhood bar.”

Tanner said they have planned for more parking than the city requirement. They recently removed the part of the building that wasn’t original and are adding interior walls.

For Tanner, the idea is to also put something back that the neighborhood has lost.

“It will be an affordable place to have a cocktail with friendly neighborhood service,” he said.

Deborah Kearney, who is opening Benny Thunders with friend Cathy Krznar, said the bar’s name is a tribute to her brother Ben, who died from brain cancer. It is her first bar and will be her full-time job.

Kearney and Krznar said they are excited about creating a unique experience in the Heights as Benny Thunders will be one of the first self-pour establishments in Greater Houston.

The TABC offered a new interpretation of the Alcoholic Beverage Code in 2019, allowing self-pour machines. The first opened in Austin's Four Points neighborhood at the Oz Tap House.

“We envision an upscale local tap house where neighbors can socialize and bring their pets,” Kearney said. “In addition, we want to provide a venue to support local artists and causes. In general, we want to create an atmosphere where we ourselves want to spend time with friends and neighbors."

There will be guitars on the wall and possibly live music down the road, although Kearney said they have no firm plans about that yet.

“We want to get an idea of what the noise is going to be like,” she said. “Maybe acoustic music in the early evening or a string quartet.”

Kearney said she applied for a late-hour permit to give them the option to stay open late on occasion, such as on White Linen Night, but does not plan for regular late hours.

The Quonset hut on the property was structurally unsound and has been demolished. Kearney said the property is under construction.

In addition to beer and wine, Benny Thunders will have non-alcoholic beverages such as sodas, coffee, kombucha and root beer. Kearney also said they will have security to check IDs, provide crowd control and monitor patrons' behavior and the noise level.

As for access, Kearney and Krznar say they will have an entrance from the parking lot, which will face White Oak behind the upcoming Agricole bar. Entry to the parking lot will be from the Columbia Street side.

“Ideally, we want to have one, possibly two, entrances from the bike path,” Kearney said. “However, the jurisdiction for approval is a little unclear so we haven't formally planned for it.”

It is the bike path access that especially concerns Dunham, who sees many public health and safety concerns with the possibility of increased traffic and drunk drivers resulting in serious injuries and fatalities.

“The bikeway is used at all times of the day and night, including by mothers pushing strollers and kids on bikes and rollerblades,” he said. “There are no stop signs or speed bumps to protect them.”

Lawrence and Dunham also question the notion of having two taverns back to back in the historic district.

“The notion that there is any culture or preservation here is disingenuous,” Dunham said.

Lawrence also said he worries about the potential for increased crime and referred to the Houston Police Department crime stats for theft on Arlington, Columbia and White Oak for the period 2015-16, which is around the time Coltivare opened. He said they show that theft was up about 60 percent.

Although Lawrence said he received a letter about Benny Thunders, neither he nor Dunham said they received notice about EZ’s Liquor Lounge.

Historic Preservation Officer Roman McAllen said he thinks that any letters came from the TABC, not from his office.

“Both of these projects involved non-contributing buildings and alterations that by city code are to be approved administratively, by staff, and not reviewed by the (Houston Archaeological and Historical Commission),” McAllen said. “They both were approved.”

McAllen also emphasized that preservation ordinances do not in any way bear on the usage of any given structure.

“It is just the essential forms of structures that are protected or regulated, and it is proposed changes to contributing buildings that are often taken before the HAHC,” he said.

Dunham said he and other neighbors will avail themselves of the opportunities for protest and appeal.

One of those avenues is to ask TABC to deny a liquor license for either one of the two bars, which residents can do if they live within 300 feet of a permit seeker. Although as TABC spokesperson Chris Porter said, the TABC follows city and state statues in its decisions.

Kamin said her office was unaware of the development and its permit applications until hearing concerns about it from residents. She is working with the Greater Heights Super Neighborhood Council to track down additional details through city departments and permitting.

“As a city with no zoning, we need stronger neighborhood protections,” Kamin said. “The protections we have, like historic districts and Special Minimum Lot Size, are regularly under attack at the state level. There's even an ongoing lawsuit as we speak brought by a special interest group seeking to remove protections our residents have fought hard for.”