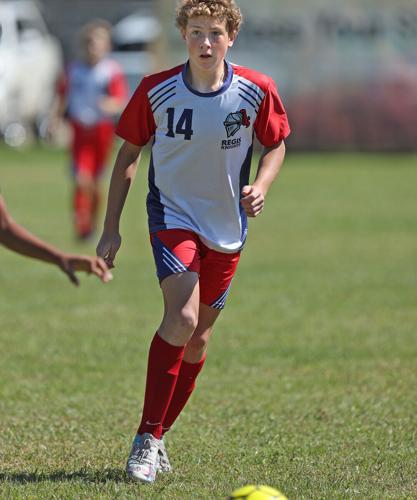 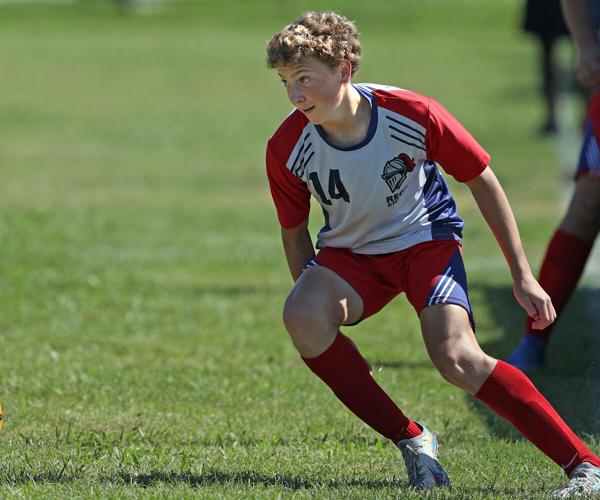 Heights resident Baker Day, an eighth-grader at Regis Academy of the Sacred Heart, competed in tournaments earlier this year in Dallas, Orlando and Murfeesboro, Tennessee. (Photo by Doug Durkee Photography) 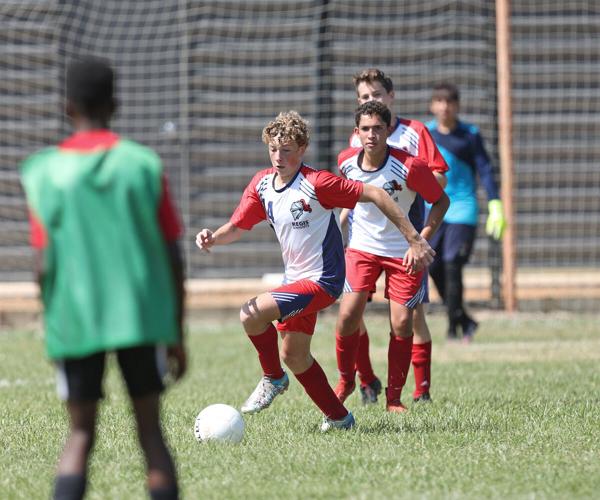 Baker Day, a 13-year-old Heights resident, goes through a soccer dill with his team at Regis Academy of the Sacred Heart. (Photo by Doug Durkee Photography)

Heights resident Baker Day, an eighth-grader at Regis Academy of the Sacred Heart, competed in tournaments earlier this year in Dallas, Orlando and Murfeesboro, Tennessee. (Photo by Doug Durkee Photography)

Baker Day, a 13-year-old Heights resident, goes through a soccer dill with his team at Regis Academy of the Sacred Heart. (Photo by Doug Durkee Photography)

Baker Day has been kicking a soccer ball around almost since he could walk, and dreamed of being a professional athlete from the moment he started playing at the Harriet and Joe Foster Family YMCA.

At his core, he’s always loved the sport.

“I really enjoyed the fact that we got to use our feet – no other sport really does that," he said. "There’s a lot of players, a lot of decisions – that’s really cool."

Fast forward 10 years, and that “cool” sport he picked up has taken him to new heights. Day, a 13-year-old Heights resident who plays center back, has been rising in the ranks of U.S. Youth Soccer. He was selected to the South Texas Olympic Development Team last year and participated this year in tournaments in Dallas, Tennessee and Orlando. Now, he is set to participate in U.S. Youth Soccer’s National Training Camp in Tampa, Florida, from Jan. 27-30.

U.S. Youth Soccer spokesperson Ryan Loy said 250 players were selected for the camp out of 1,100 eligible players from state and intraregional teams. And it’s been quite a ride for the young Day, who never quite saw this on his horizon when he tried out for the South Texas team.

He was one of 20 players nationwide from his age group to be chosen for participation in the camp.

“Before the tryout, (U.S. Youth Soccer) was not on my mind at all," Day said. "I didn’t even know if I was going to make the tryout – then I found out about all this.”

But even after all of that, the thought he would be viewed as one of the best remaining players seemed like an unattainable dream that is now reality.

“I thought, ‘There’s no chance. That would never happen,’” Day said.

But it has happened. And though it was a surprise to Day, it may very well have been an even bigger joy to parents Ashley and Jeff Day – the latter of whom played soccer in high school and has trained with Baker for much of his life.

“His reaction was very modest – there was almost no reaction, and that’s because he’s so humble. But I’m floored still – I can’t believe it,” mother Ashley Day said.

Over the last year and change, Baker Day has traveled thousands of miles across the country, played dozens of games and met countless new faces. He said the camaraderie of the team – between both coaches and players – is what has made the treks and travel more enjoyable both on and off the pitch.

“This whole thing has been really fun, just traveling around and seeing new places, seeing how they play and how they experience the sport," he said. "I’ve met a lot of friends from the new teams that I’m being placed on, and we’re still connected today. ... It’s been pretty brotherly, really, with the connection between the team. Then on the field, it’s the same attitude. We’re always being positive to each other, and that’s really what I like most about it.”

That positivity is preached to the players and an extension of what he already does on and off the field, according to Ashley Day. Baker is looked to as a leader at Spring Branch’s Regis Academy of the Sacred Heart, Ashley said, where he is a center back and captain of the school’s varsity soccer team. He also plays rugby and basketball at Regis.

As captain and center back, Ashley said her son’s job is to lead and direct the team with confidence and humility. And that dedication to working together and building others up is the reason she believes her son can go far, regardless of whether he decides to pursue soccer as a career.

“(This experience) assists his leadership skills,” she said. “He never puts himself first. He always thinks of the team. It’s always about the team and building others’ confidence.”

To that end, Baker Day said he had not given much thought to building his soccer dreams beyond the general youthful wish of becoming a professional player prior to his U.S. Youth Soccer experience – at least in regards to what it would take to actually achieve such a dream.

But that’s not the case anymore.

“It’s been really different from past years – I’m transitioning to a higher level and really just putting in more hard work, preparation and training into it,” he said. “… Now that I’ve done this, I’ve seen how I can do it. (I’ve seen) where I can go, and all the things that I can do to become it.”

Ultimately, time will tell where the eighth grader’s future lies in the sport he loves and has dedicated countless hours to perfect – especially this past year.

But if there’s one thing he knows, it’s that he sees many more options for a potential path now than he did just one year ago.

“High school is a good route, but club teams and this team will be a great jump for my future,” he said. “I’ll see where it takes me and get as many opportunities as I can.”